The Little House That Couldn't 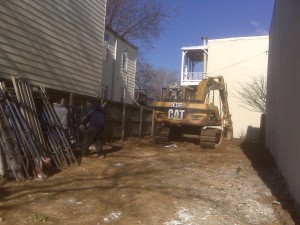 You may recall walking up C Street Southeast to Eastern Market on weekends, past a dilapidated house, boarded up and yellowing, collecting old newspapers and rubbish.   It is no longer there. It is now a vacant lot, covered with hay, behind a cheap fence.  Once a Chinese-American-owned market and/or drycleaner (I’m not Robert Pohl–ask him) with historical chops, the building was never renovated, preserved, gutted or restored, as so many of our neighborhood’s homes are after decades of neglect and abandonment. It did not have the happy fate of passing into the hands of  a young, eager buyer or  young family, like the homes beside it. Nothing was salvaged, nothing was preserved; it was entirely razed by the city. The fact that a razing in the historic district is so rare, but could set a precedent, combined with the prime location of the house –a block from Eastern Market and formerly at 820 C Street SE– as well as the unusual position of the owner (she is neither destitute nor alone, but well-connected and, by  all appearances, affluent),  make the saga of ‘The Little House That Couldn’t” one worth telling as a long winter’s tale.

Neighbors have been wringing their hands about the property for years, yet in the final act of demolition, the original brick façade later overlaid with stucco, could not be salvaged, according to the contractors who tore it down by tying large pieces of the structure to a large CAT tractor (this is what one of the subcontractor pointed out to me).  The brick would have taken some pulling down, some who know brick say.  But it was deemed unsalvageable. The little house/old shop had historic merit as perhaps the first Chinese-owned storefront in the city, and looked to some as a fitting little companion to its neighbor. But alas, the roof had pancaked into the basement after last year’s Snowmeggadon, city sources say, and caused a clear danger to the neighboring property; therefore, most of it had to go. Helder Gil of the DC Department of Consumer and Regulatory Affairs said his agency worked closely with the city’s historic preservation folk, but the facade “just became structurally unsound.. It had had to come down when it came to that point.”

Tim Dennee of the Historic Preservation Office, (or HPO, who at first thought the facade could be stabilized) said that after working unsuccessfully with the owner of 820 C Street to get her to stabilize her property, DCRA and HPO worked to find a solution that would remove the immediate danger to public safety, while still preserving the historic façade.  After DCRA began demolition, however, “the Chief Building Inspector determined that the façade was destabilized and needed to come down.  The inspector consulted with HPO as required, but due to the extent of damage and potential hazard to the construction workers, there was no reasonable alternative,” Dennee said.

Some think it didn’t have to happen this way.

“The destruction of the historic storefront house at 820 C Street, SE was shocking – both what the scofflaw owner accomplished over a number of years while she claimed to be concerned about her family’s historic home as well as the resultant empty lot that is a stark reminder of her callous disregard of that heritage and of the neighbors.   Vacant property procedures are supposed to help neighbors by having buildings renovated for habitation and to avoid historic buildings from being torn down – this time those procedures failed and it’s infuriating to have lost this building under these circumstances,” said Nancy Metzger, chair of the Historic Preservation Committee of the Capitol Hill Restoration Society.

The DC Building Code (DC ST 6-801) provides a process in which the Chief Building Inspector is required to consult with the HPO (before taking action to abate unsafe building conditions on designated historic property.  It requires that no action to demolish or alter a historic property be made unless there is an extreme or immediate threat to public safety, or where the unsafe condition cannot be abated by shoring, stabilization, or securing of the structure.

Said ANC 6B SMD 05’s Brian Pate, who organized a neighbors’ meeting with DCRA and city inspectors late last year, “820 C St is an extreme example of demolition by neglect. Tearing the building down was the right thing to do, as the building posed a significant structural hazard to the surrounding buildings, and a general sanitary hazard to the neighborhood.  If anything, it should have been done sooner.” Pate backed the removal of the entire structure: “I am pleased with the responsiveness of the city to neighbors’ concerns about various facets of the demolition. They listened to the neighbors and incorporated their feedback into their demolition approach and final determinations regarding attempts to preserve the building façade.”

According to sources, the house has been untended for 40 years. It is owned by Jeanie F. Jew, of Springfield. Information aggregated over the Internet puts her at age 69, married, and quite the pillar of the organized Chinese-American society. Her bio on the Fairfax County.gov website, where she chairs the county Commission for Women, is extensive: it states she is a nationally known speaker, consultant, has been a consultant to Federal agencies, the U.S. Congress, and to national organizations on matters relating to women and Asian Pacific Americans. Currently, she is the National Chair of the Organization of Chinese American Women (OCA), which she founded, along with the original Congressional Asian Pacific American Staff Caucus and of Asian Pacific American Heritage Week/Month, and the primary writer of legislation which called upon the President and the Congress to set aside a period in May (later extended to a full month) to focus attention on the population’s heritage. She was born in New York. Why didn’t she save it from the demolition crew, which razed the property the last week of December through last week, is an open question, as she had told the city and others that she intended to fix it up.

Jew did not return an email or phone calls and a call to her at the OCA, where the person who answered the phone, said she was not good about checking voice mail or emails.

Sources who have spoken with Jew say she discussed getting grants to fix up the house, challenging the fact it was no longer a commercial property as her ancestors had used it, and that she would not sell because of Chinese family tradition, despite offers, including one that would have installed plaque on the facade to honor her grandfather, one person recalled. A source noted that the tradition of not selling a Chinese ancestor’s first property is also the cause of a problem building on the 400 block of H St. NE.

For neighbors, it had become much more than an eyesore–it was a danger and causing structural stress and water damage problems to the adjoining structure, the home of Vince Iannacchione.  “My primary concern was that the roof was collapsed–it is on the same plane as my roof- and was creating a seam, a split in the roof, and water could get in,” Iannacchione said. “When we bought the house, and one of the inspectors was pointing it out” He has been in touch with the city pretty much since he bought the place, and has dealt with multiple people and at least five city inspectors checking out the roof situation over the past two years.

Iannacchione pointed out something we take for granted on the Hill, for better or for worse:  “[Our] row homes are a part of Capitol Hill. We are interlocked with our neighbors.”  He wondered how letting the structure fall into ruin could be honoring Jew’s ancestors, as some had noted was her intention in holding on to it. One neighbor noted that it is Chinese tradition to keep the first property your family has ever owned. Nevertheless, the future is in limbo for the site, and no one is sure of the outcome, but DCRA says there is nothing on the books preventing it from sitting as a vacant lot for years.

The next step is for Jew to pay the contractor’s bill to the city for razing the property, Gil said, although he didn’t have the amount at hand. If she doesn’t pay in 30 days, a lien is placed on the property. If the lien sits for a few months, the city will transfer the lien into a personal judgment against Jew so the lien doesn’t sit there for decades. “Our goal is to get repaid. Taxpayer money was used to raze it,” Gil said. 820 C Street is is accruing property taxes on to, as well, so if Jew doesn’t pay after several years, it can be sold at a tax auction. If she pays us for the work and the property tax, then it can remain as a vacant lot for however long…“if that is what she wants,” Gil added.

16 responses to “The Little House That Couldn't”