Petco, Starbucks Coming to the Neighborhood–Again. 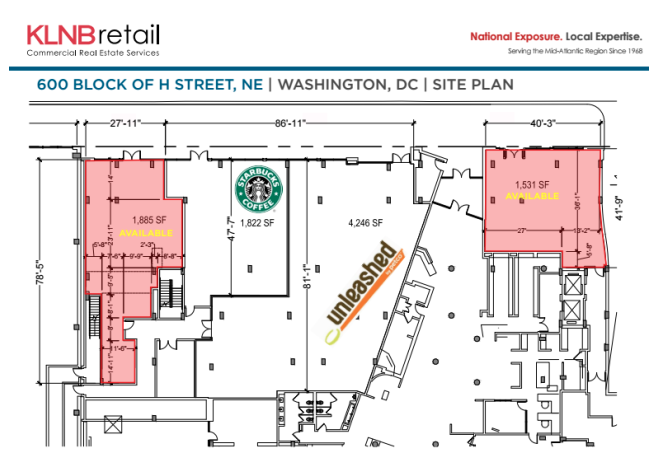 Main floor diagram for the 600 Block of H Street NE property by KNLB retail, via PopVille.

According to a recent post from PopVille, a Starbucks Coffee and a Petco Unleashed are among the stores that will be coming to the development in the 600 block of H Street NE. This means that, across the street from a shiny new Whole Foods Market (which will probably serve overpriced coffee products itself), we will have a Starbucks. In glancing at the flyer shared by a PopVille reader, it is evident that two more spaces are available for retailers within the KLNB retail flyer. You can check out the KNLB site over here.

The news feels a little… well, repetitive. Within a two-mile radius, there are two Petco Unleashed stores: the Navy Yard one as well as the NoMa one, on 1st and M Streets NE. Why not open a full-service Petco at one of these places, so that exotic pet owners don’t have to trek out to Columbia Heights or the suburbs is beyond me, for instance. Metro Mutts‘s H Street branch, 508 H Street NE, already caters to dog and cat owners: They will be most affected by this announcement.

As for a Starbucks Coffee, it will be the first to open on this stretch of H Street NE. This will be welcome news to many coffee drinkers, but when we think about the coffee offerings on H Street –Uni Bistro (formerly Batter Bowl Bakery), Sidamo, Maketto and Bullfrog Bagels are the first names that come to mind– it becomes apparent that there is no actual dearth of coffee offerings on the high street. Within my own Facebook community, there was also talk that the old Checkers on 14th and Maryland NE will become a drive-through Starbucks– something worth mentioning here only as a rumor until it’s confirmed. This Starbucks would also join its sisters at 3rd and Pennsylvania SE, 8th and Pennsylvania SE, 14th and D SE (inside Safeway) and the two Starbucks inside Union Station, 1st and Massachusetts NE. That’s a lot of coffee.

I’m sure that by the time 2017 rolls around, these stores will have become an intrinsic part of the landscape: no more or less discussed than any of the other major retail chains that have alighted with less fanfare in the neighborhood in recent time. However, it feels tone-deaf to see new stores opening that are direct competition to small businesses in the community or that already have several branches within a very small geographical area. H Street NE is mostly restaurants, and (somewhat inexplicably, but non-judgmentally) the AutoZone on 12th. Seeing CVS arriving at the corner of 7th and H NE earlier this year was wonderful, but where are the independent clothing or apparel stores? For that matter, where are the big-name clothing stores? Not until REI opens its flagship store at the Uline Arena, will we have a major retailer in the general area, apart from the H&M at Union Station (and a few assorted stores that seem to change), stores that people seem to forget are there– something that should change. (Call me, Union Station!)

As I write this post, I’m reminded of a rant we published some years ago on this very blog (and which I cannot seem to find) on getting better –or any– clothing or shoe retail. Recently, I whined about it on Twitter and I received a lovely but sad response from Bill Walsh a.k.a. The Slot:

@TheMadameMeow Hahn Shoes, 223 Pennsylvania Ave. SE! But I guess 1920 is *too* yesterday. pic.twitter.com/zkhgwIFURM

Bill later made an address correction: Hahn Shoes was at 233 Pennsylvania Avenue SE, which is present day’s MyEyeDr.

Come on, fancy retailers! Can we have a little wish-fulfillment this year? Bring retail we all actually need (and Twitter-clamor for) to our high streets!