Raising Children on the Hill 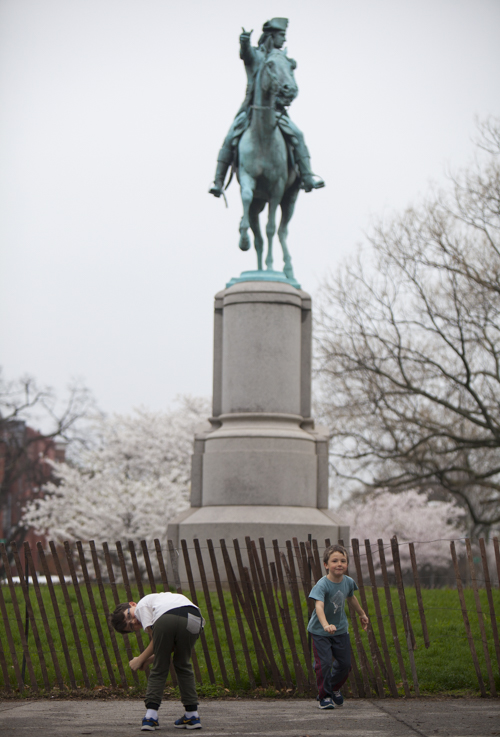 Straight from the horse’s….. end. Photo by María Helena Carey

You know what the best thing about raising kids in a big city is? All the unsolicited advice from friends and complete strangers on your choice. I kid (haha), but only a little: one of the joys of parenting is having your choices examined and judged by random people.

On a lemon-bright June day a couple of years ago, my sons and I were walking on Massachusetts Avenue NE. We were moving toward Columbus Circle, going past the National Postal Museum. For those who have never walked this way, that section of the street is favored by vagrants who sit on the low southern-facing wall, chatting and asking passersby for change. People are usually pleasant or indifferent along the wall, except for a grandmotherly-type homeless woman who blocked our way.

Not expecting a question, I asked her, “Do what?”

“Bring them HERE,” she accused, gesturing around herself.

I retorted, “We live here.”

She thought that was a terrible idea, but used far more colorful language to convey her point. I gave her a piece of my mind in return and walked away from her, holding their hands tightly in mine.

The children were delighted.

The skirmish made me think about my reasons for urban living: Why would anyone bring children up in a city, let alone the District? A small, stuffy city where they will grow up without congressional representation and with peculiar local politics, to say the least? And within the city, why choose Capitol Hill– the site of the Capitol but also a name associated around the country with unpleasant things?

Because, simply put, Capitol Hill is the best neighborhood in the city. For starters, there is the little museum hiding behind “Our Lady of the Invective.” The National Postal Museum, part of the Smithsonian complex, is a great place for children to explore and learn about how the country came together and stayed in touch in its early days. Across from the Postal Museum is Union Station. The stately building, a combination of Classical and Beaux Arts, is the dream of any train-obsessed child, and a beautiful place to enter the city or escape it. It also boasts a growing collection of great stores, so we Hill folks don’t have to trek out to other parts of town for retail (although many of us have not recovered from the nasty shock of losing Barnes & Noble to Swedish retailer H&M). If you keep walking southeast on Massachusetts Avenue, it will take a while to fully explore all the great things there are to do in this happy, quirky neighborhood that started as a pied à terre for those working in the cake-shaped building that gives us our name.

While it is true that my narrow Victorian rowhouse is not quite meant to house two rambunctious boys with boundless energy, I am not too concerned. There are charms to raising children in bucolic environments, of course, and our memories can wax as poetic as we let them, recalling solo walks to and from the center of town, large expanses of earth, neighbors you can count on one hand, and the freedoms of small-town living. My children won’t have those memories.

However, a pick-up game of soccer on the United States Capitol grounds; feeding the ducks at the Reflecting Pool; riding the Metro to summer camp; seeing the sun setting on the Potomac from a boat; and catching an impromptu US Navy Band or Fourth of July rehearsal concert during an evening stroll are just a few of the memories that we are busy creating. These are memories only possible living in DC, and they are part of the reason why I’m so happy to be raising kids on Capitol Hill. Not only does the Hill offer a front-row seat to history and beauty, but it boasts some of the most involved and civic-minded people I’ve had the pleasure of meeting and calling neighbors. These neighbors pour their heart and soul into everything, from our kids’ schools to the small-town Fourth of July parade that takes place on Barracks Row on America’s birthday.

There is also the Yahoo! group Mothers on the Hill, known far and wide as MoTH, and which wants you to know Dads are welcome, too. A group that started over 10 years ago with just a few moms wanting to share parenting woes online, MoTH now boasts over 3000 members, many of whom are happy to give advice, share tips, help out in welcoming new babies, or lend a shoulder to cry on or a helping hand in times of trouble. At its best, MoTH can be a wonderful community of parents who make life in our urban community better, richer, and definitely a lot more colorful. If nothing else, it can fill your life with that one set of hand-me-down toys you didn’t even know you needed.

But don’t take it from me: I came to Capitol Hill in my 30s and even though I still pinch myself when I walk by the monuments and the view of the glowing dome from Union Station makes my breath catch in my throat, I have not experienced DC through the eyes of a child. So I turned to my kids to help me flesh out my point. The older one loves the parks and the open spaces. The little one loves whatever the older one loves, but both agreed that feeding the ducks at the Capitol Reflecting pool is pretty grand, and that water from the fountains at the Grotto at the Summerhouse, on the west lawn of the Capitol, tastes better than regular water. Also, the biscuits taste better if they are from Eastern Market, a slice of cheese from Bowers Dairy is an expected treat, and there is no better pretzel than a Pretzel Bakery one. And a Capital Fourth is the best holiday on Earth and possibly Mars. I could add more of what they said after that, but it mostly involved farting noises.

If you are reading this you probably are raising your children in this neighborhood. Give us a shoutout here, on Facebook or on Twitter and tell us your stories about raising children in a city!

A version of this post appeared in the 2015 edition of the Fagon Guide.

3 responses to “Raising Children on the Hill”