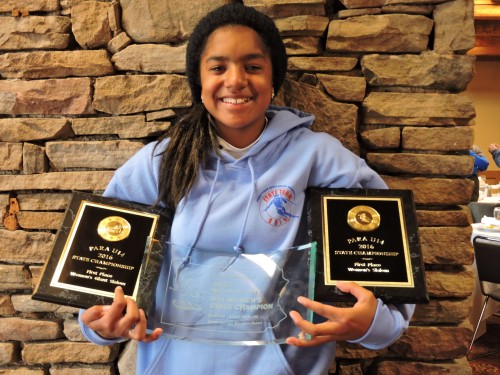 Zoe Crute holds her medals after the race. Photo courtesy of Jerry Crute.

It’s Monday after Daylight Saving Time and you need a story to perk you up and warm your heart (…because, seriously, where did summer go?! Oh, that’s right. It’s still winter.) Let me introduce you to Zoe Crute. Zoe is, according to her dad, an average 13-year old girl growing up on Capitol Hill. She attends Washington Latin PCS, where she is an A-student. She plays soccer and loves to ski with her brother— she’s been skiing since age 4. Her whole family is into skiing, and they belong to Black Ski and the National Brotherhood of Skiers.

But Zoe is an exceptional skier: This past weekend, she raced in and won the 2016 Pennsylvania State Ski Championship for U14 Women: she won both the slalom and the giant slalom competitions. With that big win, she will be competing in the the U14 USSA Eastern Championships in Sunday River, Maine this upcoming March 18-21. Zoe is believed to be the first DC resident who has become an overall champion in the The Pennsylvania Alpine Racing Association, an association whose member area covers Pennsylvania, Maryland, Virginia and the District.

Join us in congratulating Zoe and her family, for supporting and encouraging a gifted scholar athlete! We hope you do great in the upcoming championships and can’t wait to see what you achieve next!