Hey there nerds! Tonight is Obama’s final State of the Union Address! You can watch on C-SPAN or through the live feed at the White House’s dedicated site: https://www.whitehouse.gov/sotu, and Gizmodo also has a whole post dedicated to how to watch here.

Now for the business: Starting at 7 pm tonight, many streets in the western area of the neighborhood will be closed. The State of the Union Address starts at 9 pm EST, so plan accordingly. From Alert DC:

MPD reports the following area will be closed to vehicular traffic for the 2016 State of the Union Address beginning at 7:00 pm on Tuesday, January 12, 2016.  These closures will restrict vehicular traffic on public roads surrounding the U.S. Capitol.  Access into the restricted area will be granted only through designated access points, to those vehicles displaying the appropriate event placard.  The closures in this area will remain in effect for the duration of the State of the Union Address and will include the following public streets:

EMERGENCY NO PARKING ZONES FOR 2016 STATE OF THE UNION ADDRESS

The following Emergency No Parking Zones will be established for the 2016 State of the Union Address to account for the necessary security measures during the event:\

And what would be of a SOTU watching party without the drinking games? We have plenty of links for you below, as well as STOU Bingo! I mean, if you get stuck coming back home, you’re going to need some entertainment. You can also follow along with our friends at Cloture Club by using the  hashtag #SOTUGame. You are also invited to join Councilmember Charles Allen at Smith Commons for a watch party. 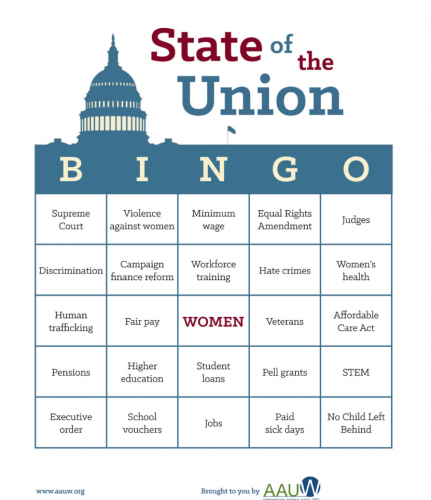 If you do go out, make sure you have an Uber, Lyft, or a DC cab lined up afterward, and Drink Responsibly!

The very bipartisan Debate Drinking Game (I mean, does alcohol pick a side?)

Last but so definitely not least, the American Association of University Women has a bingo WITH PRIZES