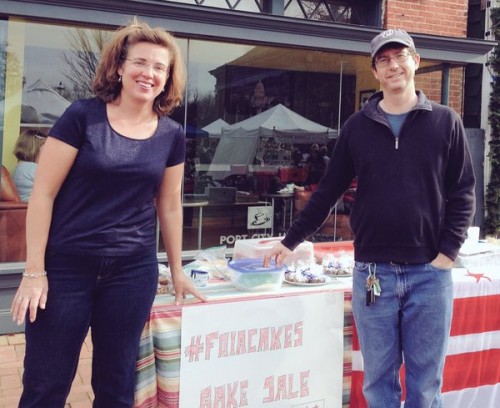 Remember the FOIA Bake Sale? ANC Commissioner Denise Krepp submitted a request under the Freedom of Information Act for information concerning DOJ prosecution rates in D.C. Neighbors offered to help with the costs by organizing a bake sale.

Krepp has finally received a response from DOJ, saying that they could not find any records related to the prosecution of crime in Washington, D.C., and that they do not have the means to search for or retrieve the data. Krepp has created a Change.org petition to have DOJ begin compiling the information. The importance of this, she explains, is that, “Compiling information regarding cases and caseloads will give DOJ a baseline to measure against. Absent this information, DOJ can’t measure success or failure. And as a DC resident, I want DOJ to be successful because their success equals decreased crime.”

Krepp further explains the importance of this on the Change.org page, also shared below. Please consider signing this petition and putting pressure on authorities to track and share this information with the public.

Washington DC is experiencing a crime wave – homicides, armed robberies, and other violent crimes have significantly increased in the past year.

This request was made on behalf of my residents in ANC6B10. I submitted the request after reviewing DOJ’s 2014 annual report and identified that they were not prosecuting all of the violent crimes that occur in the city.  Many of my residents were victims of violent crime last year and I was troubled by the fact that the individuals who committed these crimes were not being prosecuted.

I received a letter from DOJ earlier this week stating that a search of documents revealed no responsive records and that DOJ does not have the means of searching for or retrieving information concerning the prosecution of crimes that occur in the nation’s capital.

There were 162 homicides and 3,447 robberies in Washington, DC in 2015. Compiling information on how, when, and why DOJ prosecuted these cases is a must do.  DOJ won’t be successful in helping the Metropolitan Police Department stop the crime wave until it has the prosecution data identifying the type of crime that is occurring, the frequency of the crime, and the individuals committing this crime.

Thank you for signing this petition.  Washington, DC is an amazing city and your support today will help make it a safer one.