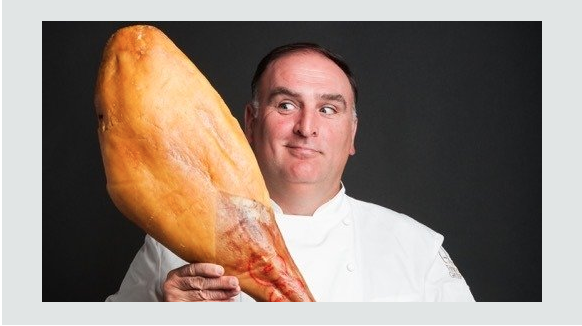 The Washington Post reports that José Andrés and ThinkFood Group have backed away from the Trump hotel!

I emigrated from Colombia when I was 14 years old. My mother, through persistence and hard work, moved our family so that I would not come of age in what was, at the time, one of the most violent countries in the world. Car bombs were “all the rage,” if you will pardon the joke, in the late ’80s and early to mid ’90s all over my native Bogotá. Places like national police headquarters were badly damaged and thousands died on a daily basis. My school at the time received constant bomb threats. The United States allowed me to be a teenager and consume dangerous amounts of pop culture, instead of fearing for my safety and that of my loved ones.

I am a proud immigrant who was lucky enough to belong to the middle class. While I love this country dearly, I will not sit idly as a Presidential candidate insults people who have escaped worse situations than I ever knew, calling them criminals and rapists and insulting my people. If you mess with Latin America, you are messing with all of us. One wonders if Mr. Trump –purportedly a savvy businessman– is aware of the law of supply and demand. A large part of the crime, poverty and violence that afflicts countries like Colombia and now Mexico is a direct result of the insatiable demand for drugs from powerful first-world countries such as the United States, but I digress. By lumping people whose only crime is trying to escape a bad situation to have a small slice of the mind-boggling abundance that is America, Mr. Trump shows off his ignorance of foreign relations, as well as his utter hypocrisy, considering the Old Post Office is getting the Trump makeover thanks to all the immigrants who work in dangerous conditions daily for little pay.

When I saw the petition started by Capitol Hill resident Erick Sanchez on Change.org that calls for José Andrés and Think Food Group to abandon plans to open a restaurant at Trump’s upcoming DC hotel, I signed it immediately. (Want to sign the petition? You can do so by clicking this link.) Since Sanchez started the petition less than two days ago, it has already earned over 1700 signatures. I reached out to Sanchez, who happens to be a THIH reader (thank you!), to comment on why he started the petition and this is what he had to say,

José Andrés is a role model for the Hispanic community and a beloved restaurateur here in Washington and around the world. It’s clear that Donald Trump, in light of his insensitive remarks, has created a hostile business environment for his partners. José Andrés would join a list of well regarded businesses and celebrities by cutting his business ties to Donald Trump. It might be an inconvenience in short term, but I feel that ThinkFoodGroup and its employees would ultimately benefit in a long run.

Yes, José Andres: your career and your restaurants are an inspiration to us all (especially the guacamole at Oyamel, which thankfully has no peas). Let me join Erick’s specific plea in the petition: you have snubbed the Eastern Market area far too long, Pepe. How about a Capitol Hill restaurant instead? I hear the competition’s a little tough, but échale ganas, (that’s “give it your all,” for the gringos) and we might swing around.