Lost Capitol Hill: The Shad-hatcheries of the Navy Yard

For the past couple of years, the Anacostia Watershed Society has partnered with local schools to help with the shad population in the Anacostia River. By protecting the eggs during their gestation and hatching, a far larger percentage of the eggs turn into hatchlings, jump-starting the fish’s recovery in the river.

As it turns out, however, this is far from a novel idea. Shad (a type of herring) have been an important resource in the local waterways for centuries, and have thus been overfished almost as long. Assisting them in their struggle to remain viable has been a priority for government for over 100 years. In fact, one of the hatcheries used in the late 19th Century was in the Navy Yard.

Thomas B. Ferguson was Maryland Commissioner of fish in 1877, and one issue he had to deal with was the overfishing of shad. He understood the vulnerability of the eggs and hatchlings, and thus wanted to build a protective environment for them. Simply dumping them into a pond was not enough – the eggs need constant motion of the water to hatch. He thus built a cylinder connected to a steam engine that moved the container up and down, giving the eggs the appropriate motion.

That year, the system was used successfully in Havre de Grace and so, in 1880, a similar attempt was made at the Washington Navy Yard.

During the spring, a series of cones were built in the “ship-house” – one of the large structures lining the shore of the Navy Yard. Every night, the Lookout, a steamer owned by the Maryland Fish Commission, would go out and collect fish, most profitably from the Potomac near Fort Washington. The eggs would then be extracted from the fish, placed in the cones, and agitated according to Ferguson’s suggestion. 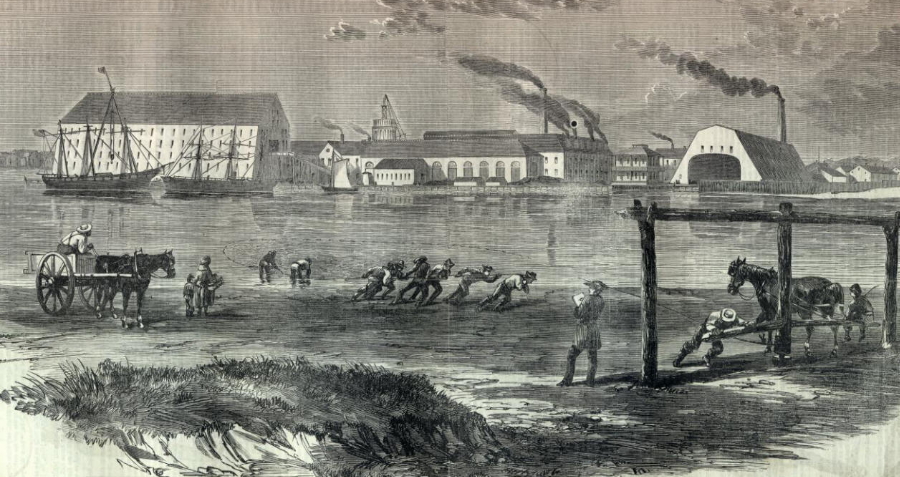 Civil War-era print showing the Navy Yard – with its large ship houses – and shad fishermen at work on the opposite shore of the Anacostia River (sonofthesouth.net)

By the end of the season, there were 46 cones, and experimentation had shown that the amount of water in each could be drastically reduced by adding air into the water. On May 23, the first shipment of hatchlings was made, sending 2 million of them to South Carolina and Georgia. Further shipments were made all up and down the east coast, and as far west as Kentucky.

Most hatchlings were, however, returned into the Anacostia and Potomac, and every one agreed that the experiment had been a full success. In subsequent years, further hatchings were done, and along the way it was discovered that making sure that the eggs had sufficient light ensured that a far greater percentage hatched. By 1882, they were hatching over 80% of the eggs received.

Sadly, this important work seems to have stopped later in that decade, and it was not until recently that the Anacostia Watershed Society has taken it up again.