One of my favorite places to do research is the Library of Congress’s map website. The number and range of maps available is truly amazing, and can give great insight into how Washington changed over the years.

While the most useful maps are the extremely detailed maps that were published occasionally over the years. However, there are some times when no maps were generated, and it thus falls to later generations to determine what, exactly, the city looked like in that period. For instance, there are few maps from the earliest days of the District of Columbia, and most of those are more aspirational than actual. One of the few maps from that era was part of the description of how to get from New York to DC in 1802 but the map is not necessarily the most accurate.

In short, getting a sense of where the houses were and thus where people lived in the early years of Washington is not easy. It was thus with great excitement that I found a map that had been drawn ca. 1931 that showed the state of the city in 1801-02. The map was put together by Artemas Canfield Harmon, of Woodley Park.

The map shows not only the streets, and the location of principal buildings, but also marks all houses (sadly, with no indication of what sources Harmon used to determine this) and even some of the ships lying in the Anacostia River.

What is interesting is seeing how the houses are scattered across Capitol Hill. Two clusters predominate – one around the Capitol itself, the other around the Navy Yard. What is today the vibrant and still growing neighborhood of Eastern Market is simply empty. No houses at all are marked to the east of 5th Street, between North Carolina and Massachusetts Avenues. 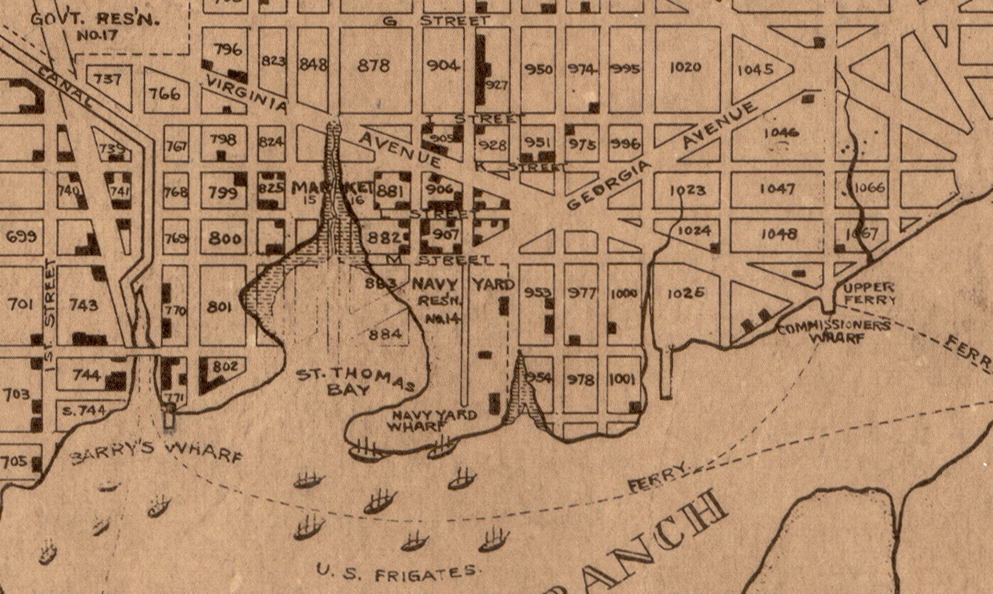 The most surprising area of development is up and down New Jersey Avenue which sports houses on almost every block. The Navy Yard is still quite small, with much of what is today solid ground still part of the Anacostia River, and given the name St. Thomas Bay. Off the Navy Yard lie some the famous frigates built for the US Navy starting in 1794. While some were being used at the time against the Barbary Pirates, others were “in ordinary” ie, mothballed, until they were again needed.

It is outside the gates of the Navy Yard that the most activity is. From 4th to 9th streets below I Street, almost all squares boast some buildings, with the main cluster near the main gate at 8th and M. It looks like the vibrant neighborhood it most certainly was, and adds to the certainty that this was indeed D.C.’s first neighborhood.

If you’re interested in looking more closely at this map, you can see it at the Library of Congress website.