As I delve ever more deeply into the history of the Navy Yard and its neighborhood, there are a lot of firsts to be worked out. Some will require more research, but I think I’ve found the first person actually to live there, long before there was a Navy Yard – or even the thought of putting the nation’s capital in the area.

The land that was eventually turned into the District of Columbia was parceled out to eighteen men in the last half of the 17th Century. Some stayed around to work their land, others sold out quickly and turned to other endeavors. One of the latter was Walter Houp, who received his land in 1686, but was back in England by the turn of the century.

His land, which consisted of two tranches, one called the Houpyard and the other the Houpyard addition, went through a number of hands, with the Addition being split into three parts. In 1764, Jonathan Slater began buying up these three pieces, purchasing the first from Henry Queen in 1764, the second from Robert Buckanon the following year, and the northern section from Walter Queen in 1778. Where exactly Slater came from, or how old he was, is unclear.

In contrast to those who went before him, Slater actually worked the land, growing tobacco.

The 1790 census has Slator (as the census-taker wrote his name) living there along with four “free white females” and 29 slaves. This made him, according to research by John Michael Vlach, the largest slave-holder on what was to become Capitol Hill. The four females were presumably his wife, Sarah, and three daughters. 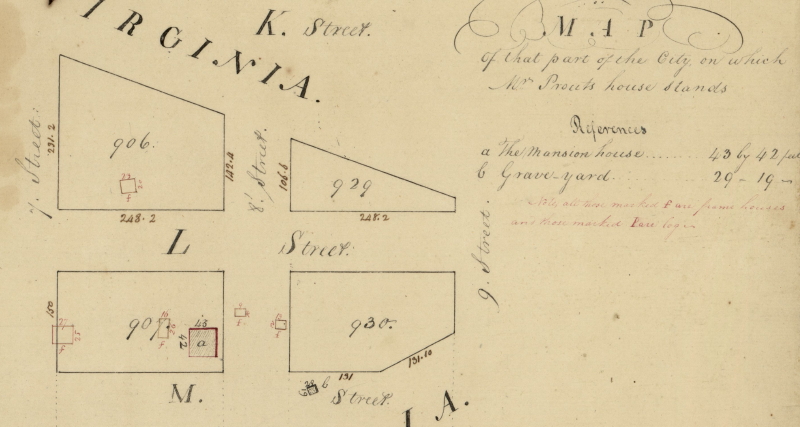 A 1796 map of the area around Slater’s land shows a good-sized “Mansion house” of over 1600 square feet ground area. It sites on the northwest corner of what L’Enfant had declared to be the corner of 8th and M Streets SE just five years earlier. Scattered around the main building are another 8 smaller outbuildings. There is also a graveyard of about 600 square feet, located in the middle of what has become M Street, just east of the intersection with 8th.

In short, it appeared to be a thriving operation. Nonetheless, Slater seems to have jumped at the chance to sell it off, namely to William Prout, who signed a contract to buy Slater’s lands on March 11, 1791. Prout had apparently caught wind of the possibility of the Federal government moving there, and had jumped at the chance for riches. He promised to pay £20 per acre for the some 500 acres of Slater’s holdings.

Slater seems to have been perfectly happy with the deal, giving Prout many years to complete the deal, as well as allowing his daughter to marry Prout on May 7, 1793.

With that, Slater disappears from the scene and his later life is as uncertain as his earlier life. But for some 30 years, he was a mainstay of what became Capitol Hill – and the Navy Yard neighborhood. Today, the Blue Castle sits on top of his grand home – and traffic races past the Latrobe Gate, and over his graveyard.