It’s Cinco de Mayo: do you know where your tacos are? 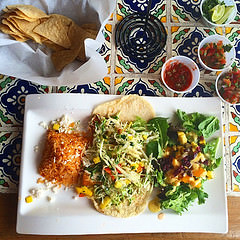 Why tacos? First off, good Mexican food is no longer available only in the West Coast. There is also the small but important detail about how our neighborhood now boasts an unbelievable amount of Mexican restaurants. Celebrate Mexico’s victory over the French by eating hearty and go crazy for tacos!

Maybe you’re a taco purist –if such a thing exists. Or really, maybe your idea of a taco is more Taco Bell than taco de chapulín (Oaxca-style grasshopper taco) at Oyamel. That is fine, taco lover: nothing wrong with wanting your taco crispy or served in flour tortillas. Acceptance, flexibility, and flavor are at the core of the taco experience. There is a Taco Bell in the bowels of Union Station, 50 Massachusetts Avenue NE, if you need a fix. I won’t tell. Let’s talk local business too, shall we?

Guy Fieri-approved Tortilla Cafe, 210 7th Street SE, is a beloved Hill institution when it comes to affordable and delicious food on the go. They have a decent taco platter that will do in a pinch, although you can never go wrong with pupusas. (Has anyone ever attempted to make a taco with pupusas? I digress.)

District Taco is a little oasis of flavors and spice. Their meats and spices are delicious. Among their tastiest offering? Breakfast tacos. Eggs, potatoes and breakfast meats wrapped cozily in a tortilla (flour comes standard, but you can ask for corn). Is there a better way to start the day? I mean, there is, but a breakfast taco ranks pretty highly too.

If you’re looking for a more upscale experience, you’re in for good eats at one of many Mexican-Salvadorean restaurants around the Hill: La Loma, 316 Massachusetts Avenue NE; La Lomita, 1330 Pennsylvania Avenue SE; La Lomita Dos, 308 Pennsylvania Avenue SE (Fun Fact: the word “loma” means Hill in Spanish); La Plaza, 619 Pennsylvania Avenue, SE. Last, not least, is Las Placitas, 517 8th Street SE. There is something to charm everyone at any of these establishments –I know someone who swears by the Queso at La Plaza. The enchiladas at La Lomita are on point. Hands down, however, the best tacos al carbon are at Las Placitas.

Through all the changes in Barracks Row, Las Placitas has managed to remain a haven for Mexican food seekers all over the Hill. Las Placitas is a standout because of their marinades –from their excellent oven-roasted pork to their chicken and meats. The tacos al carbon, served as a three-taco order with your choice of flour or corn tortilla, feature a cut of tender, juicy meat. The tortillas, which come from a long-time Texas manufacturer, hold up well. These are one-tortilla tacos: a good standard for corn tortilla freshness.

Also on Barracks Row, you can have yourself a taco party at Pacifico Cantina, 514 8th Street SE. Pacifico allows you to order tacos individually, unlike most other sit-down restaurants. The tacos come served in excellent house-made corn tortillas by default. The Big Ass taco, amazingly a one tortilla taco despite the Mount Everest of chorizo and guacamole that could turn your derrière eponymously, is decadent and good. Among the more sensibly-sized tacos, their veggie taco was my favorite. It’s seldom that one finds such a tasty vegetarian offering, one as tantalizing as its carnivorous-friendly counterparts.

If you like your tacos fishy, with a side of staffer, look no further than Tortilla Coast, 400 First Street SE. Tortilla Coast has a laid-back atmosphere, and they make a magnificent ahi tuna taco. Although Baja tacos (fried batter-dipped fish) are tasty, the best way to experience a fish taco is to lightly sear the meat so you can really taste the freshness. In this regard, Tortilla Coast does not disappoint. Pair with one of their excellent and generous Cadillac Margaritas.

The most recent addition in the southeast quadrant is Agua 301, 301 Water Street SE. A two-taco platter comes with Spanish-style rice studded with manzanilla olives and black beans. The best among their many offerings (a delicious, well-spiced chicken, two kinds of pork, an intriguing carne asada with kimchi, and a mushroom taco) is their taco al pastor, made with pork belly.

H is not just for Habanero

H Street NE has become such a destination that even the President and First Lady have dined here more than once. But do they know where they can get tacos? Now they do! In addition to solid places like The Argonaut, 1433 H Street NE, which serves a killer Baja taco plate (also available with chicken or tempeh); and H Street Country Club, 1335 H Street NE, which holds $1 Taco night on Wednesdays, there are some new gems that shine bright for the taco lover.

Sol Mexican Grill, 1251 H Street NE, offers the Chipotle experience, but with a homier touch. The lower floor is quick carryout-style food. The upper place is the sit-down restaurant. Since tacos are a fast, carryout kind of meal, I will focus on the taco experience at the downstairs restaurant. Sol does not disappoint: their staff is cheerful and generous, and their fillings are flavorful and well-spiced. Sol does not make their own taco tortillas, but they do heat them up right in front of you. They drizzle them with a little bit of fat before placing them on the press. Vegetarians/vegans would do well to be aware of this step.

Chinito’s Burritos, 635 Florida Avenue, NE. Although it is mostly a burrito provider (Hark, West Coast dudes!), Chinito’s also serves its fillings (beef, pork, chicken, shrimp and veggies) in corn or flour tortillas, as well as bowls. The tacos come ready to carry out, wrapped in foil, although you can also dine in. The mouth feel of some of their meat fillings did not satisfy me as much as their shrimp taco did: the mojo was light but very tasty.

Chupacabra Latin Kitchen and Taqueria, 822 H Street NE, is a cheerful homage to Latin influences. A whole article here could be devoted to how delicious their Venezuelan-style arepas are, but I have to keep reminding myself that my mission is to get you excited about tacos. Chupacabra’s tacos: they cover a wide range of fillings. From a marinated tilapia type called Pescado de Jamaica to two kinds of pork, shredded beef and chicken, you are sure to find a favorite. My favorite is the Al Pastor, with crispy pork having a passionate tastebud-exploding affair with pineapple. They also have some of the more exotic-sounding flavors you are bound to find on the Hill: a very spicy goat taco and a beef tongue one. All tacos come in corn tortillas and wrapped inside aluminum foil to keep them fresh and warm –unless you order to consume directly, in which case you will be served in red plastic baskets.

Impala Taqueria y Cantina, 1358 H Street NE, is a former pop-up which opened its doors back in May of last year. My brain has been overtaken by three simple words to describe this place: pork belly tacos. Must-try, a thousand times over. Impala makes their own tortillas from scratch daily: this makes the taco-eating experience that much fresher and legitimate. But when said supple tortilla arrives laden with perfectly cooked, glistening, flavorful enormous chunks of pork belly, the experience really goes to eleven. Topped off by some zesty red onions, this is the kind of taco you inhale. Fun fact: if you eat pork belly tacos whilst in the company of children, and you assume they won’t like pork belly because the flavors are too grown-up for them, you will be wrong. Children can and do pick off the gorgeous onions, leaving you to stare at them on the now-empty plate, as they steal the rest of the taco and you’re forced to order more.

One response to “It’s Cinco de Mayo: do you know where your tacos are?”