I have previously written about the Statue of Freedom on top of the Capitol, how it got its hat, and how it does not, infact, limit the size of the statues in Washington. I will return to this subject one more time today because of a book I just began reading, Freedom Rising: Washington in the Civil War, in which the author, Ernest Furgurson describes the odyssey that the statue took in getting to D.C., a trip that is most certainly worth writing up.

After the whole question of the statue’s headgear had been cleared up, Thomas Crawford sculpted a final, plaster statue. This was to be used to cast the final, bronze, statue. Crawford wished this casting to be done in Europe, in Munich, to be exact, as their bronze casting was the best in the world. Events both political and personal would conspire to torpedo this plan. For one, Montgomery Meigs, who was in charge of the Capitol expansion for which this statue was to be the capstone, was keenly aware of the Know-Nothings who dominated the discourse in the US – and had recently stopped the building of the Washington Monument. For them, no foundry but a US one would do. Furthermore, after he had completed the plaster version, but before it could be cast, Crawford underwent surgery on his eye, a procedure he did not survive.

Thus it fell to his widow to get the plaster statue to the United States. Having had it boxed up and transported some 200 miles NW from Rome to the port of Livorno (usually referred to as Leghorn at the time) the boxes were put aboard the bark Emily Taylor, en route for New York.

This proved almost immediately to be a poor choice. Three days after embarking, before even leaving the Mediterranean Sea, the Emily Taylor began taking on water. She limped along before putting in to Gibralter on May 19, 1858 – exactly a month after having left Livorno.

Repairs took over a month, and thus it was not until June 26 that she left Gibralter. The repairs were clearly not done properly, as within a week, she was taking on water again. By July 12, the leaking had gotten so bad that it became necessary to heave some of the cargo overboard. While the crates containing Freedom were untouched, rags and citron were consigned to the briny deep. 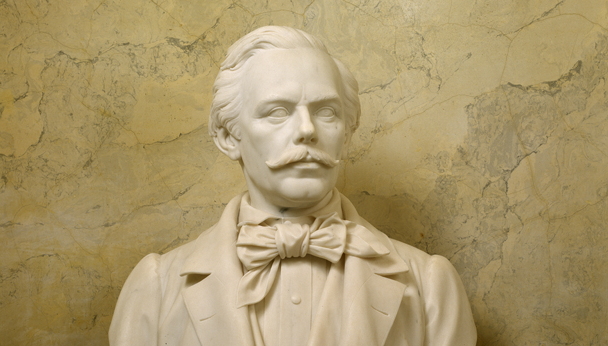 With New York now no longer reachable, it was decided to put into Bermuda. In port, it became clear that the Emily Taylor was no longer seaworthy. Her cargo was put on land, and she sold for scrap. In order to bring Freedom to the United States, it was thus necessary to dispatch another ship, the G. W. Horton – which turned out to be too small for the entire cargo, and thus brought only four of the crates to New York, arriving on Christmas Eve, 1858. The final two were brought by another ship (whose name seems to have escaped everyone) and made it some time in late January or early February, 1859.

The trip from New York to Washington was also effected by two ships, the Statesman and Fairfax, but finally, in April 1859 – a year after they had left Livorno – all the pieces were ready to be assembled. Meigs had them put together in the old House chamber, which was then closed to the public.

The next step was the casting, a subject for a future column.