I will admit that this post is, a) late (it should have run before Hallowe’en), b) off-target (it describes a site well outside of pretty much any definition of Capitol Hill), and c) sadly sparse in detail. Nonetheless, the very subject makes it worthy of a post, and –hopefully –of your time reading it.

Pet burials have a long tradition, going all the way back to the ancient Egyptians. However, the tradition died out. It is only recently that the idea that Fido or Fluffy deserves a final resting place has been revived. Even well after pets became widespread in the middle of the 19th Century, the idea that you would spend money on a place for your deceased animal companion was considered fairly amusing, and most turn-of-the century newspaper articles about this new phenomenon are tinged with more than a little snark.

This derision hardly stopped the good citizens of Washington for wanting a place to bury their pets. As of 1902, the Fourteenth Street Hospital for Dogs advertised a ‘Dog cemetery,’ though sadly without specifying where, exactly, it was located.

A dozen years later, a short article in the Evening Star announced an upcoming walk starting at 15th and H Northeast, and including “the Eastern Branch section and a visit to the dog cemetery.” A few days later, on November 9, 1914, another article gives some tantalizing clues as to the location of this place. The walk had begun as advertised, then continued up on the eastern side of Bladensburg Road, through what can be seen in maps of the era as Graceland Cemetery – today the Carver/Langston neighborhood.

The walk then went through Cottage Hill, and crossed Hickey Run on its way to the Hickey Mansion, an abandoned house which must have been located near the New York Avenue gate of the Arboretum.

The walkers then turned east and went to the Anacostia River, then south along that on what they called ‘Licking Banks’ but which is usually named Lincoln Banks. There is a mention of a visit to a wharf used to transport clay from the area down the river; sadly no sign of this is visible on any maps of the times. Thus, it becomes difficult to trace the exact path that was taken, and so impossible to say where, exactly, their next destination, namely the Dog Cemetery, was located. It was almost certainly somewhere along Benning Road between the river and Bladensburg Road. Again, the maps of the time do not show any sign of the cemetery, and the whole area is, at best, marked with the names of the owners, with a few sparse houses scattered about. 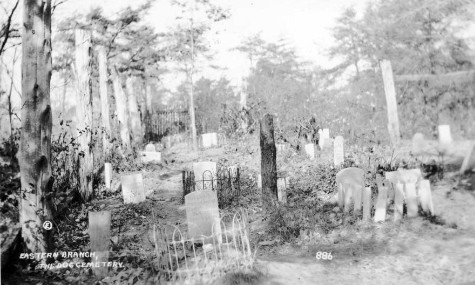 Therefore, it seems almost impossible to determine the exact location. However, one trace of the cemetery remains in the form of a postcard made some time between 1913 and 1948. Made from a picture taken by Willard Ross, and now in the Washingtoniana collection of the Martin Luther King, Jr. Library, it shows a series of graves set among trees. Two of the graves are legible, indicating that FrankDick lived from 1903 until 1913, and that Dear Little Bo died in 1908.

Sadly, that is as much information as can be gleaned from, and until someone digging around in Carver/Langston or the Langston Golf Course discovers some surprising bones, that may be all we can say about the cemetery.

On the other hand, if you’re just looking for a final resting place for your pet in the D.C. area, the Aspin Hill Memorial Park in Montgomery County has been in business since 1921, and continues to accommodate deceased pets today.