Julius Caesar at the Folger, a Bloody Good Show 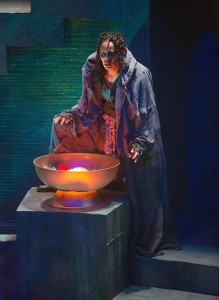 Courtesy of the Folger Theatre

Just down the street things are getting pretty messy. The attacks between the parties have been especially lethal since the mid-term Congressional elections. The Folger Shakespeare Library too is off to a violent start in Julius Caesar, the first show of its 2014-2015 season. Shakespeare’s historical look at the Roman Empire gets very bloody very fast and you should act fast as the show runs through December 7. This staging of one of Shakespeare’s great tragedies, while not such a standout as recent plays on the Folger stage, is a thoughtful examination of government at its best and worst.

Robert Richmond, director of Richard III and Henry VIII at the Folger, has crafted a portrait of democracy, ambition and honor that demonstrates his deft ability to translate the Bard’s plays into modern life. After all, the Roman Forum on Rome’s Capitol Hill was where it all started for our own Congress.

A standout performance by Anthony Cochran of Broadway’s War Horse, as Marcus Brutus, show us a man wrestling with both democratic responsibility and human nature’s love of power. He masks his lethal desire to take the powerful seat occupied Emporor Julius Caesar’s but shows how quickly a noble and honorable man can turn into manipulative politician. And for Brutus, all it takes is a bit of flattery. Sounds familiar, huh?

In the first scene Julius Caesar, played by the Michael Sharon, is on a fast-track to being crowned king. But the appearance of a eerie soothsayer, depicted perfectly by Nafeesa Monroe, shows leadership should always be ready for attack. As the mastermind Cassius, Louis Butelli, a frequent actor on this stage, is already plotting Caesar’s assignation. Butelli always shines on the Folger stage in both comic and tragic roles and this performance is no different.

After the assassination the murders allow plainspoken Mark Anthony to give Caesars eulogy. Maurice Jones shows this mild-mannered politician is the real deal, saying one thing and then does another to turn the public towards him. Things in Rome dissolve very quickly and dramatic lighting and sound effectively show a city in chaos. The Empire eventually falls into civil war.

And then there’s more blood. With deathly plumes of red rose petals littering the floor, the audience is brought face to face with brutal war and its universality. World War II costumes, complete with gas masks, show us this drama is not frozen in time but instead uncannily represents politics and war today. Actually, it’s a bit like watching House of Cards. The flatterer Casca, played expertly by Maboud Ebrahimzadeh, provides a bit of humor and guilt, but most of the characters are far more plagued by the emotion than anyone in Netflix’s dangerous ensemble.

Get tickets, get ready to see a band of conniving politicians and as you depart, take a new look at the home to our own duplicitous leaders — yes, the Capitol — just two blocks away.