Whenever we here at the Hill is Home discuss as to what we would like to see as far as retail on the Hill, one request always stands out: A place to buy socks. The possibilities for food and drink – both cooked and uncooked – are huge, but we can also get games, kitchen equipment, clothing, toys…the possibilities are endless. But such staples as socks? Not so much. A simple department store would go a long way toward covering this deficiency, a department store such as we once had on 8th Street.

The Bieber-Kaufman department store was once one of the biggest in Southeast, catering to all men’s needs. Spread out through five stores on the west side of 8th Street just south of I, they covered suits and overcoats; hats; haberdashery (shirts, collars, ties, underwear, socks, etc); and shoes. A boys department rounded out the offerings.

The store had its beginnings in the 1900 bankruptcy of Samuel Bieber, who had owned stores in the NW quadrant of DC. One of his clerks was Isador Kaufman, whose father, Emauel, was, himself, a major player in shops in DC. The three men struck a deal: The Kaufmans would help Bieber open a store in what was then Bieber’s house on 8th Street SE. In 1901, thus, the store opened, and were an immediate success. While the papers had ignored the opening, for the one year anniversary the words of the Post wrote that the “success that has attended the Bieber-Kaufman stores during the past year has been most marked, and shows what enterprise backed by good judgement can accomplish. No finer outfitting esablishment is to be found in the whole city, and no better or more tasteful selection of high-grade wearables.” 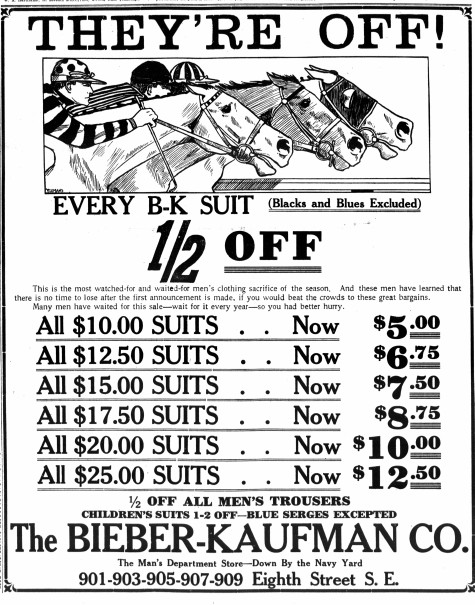 For the next 30 years, and even past the retirement and later death of Emanuel, Bieber-Kaufman continued doing business. Their success was built on undercutting their competition, and they claimed that they could sell every suit for five dollars less than anyone else due to their “economical location.” A Washington Times article (that may actually be an ad) claimed that they “do a city-wide business with men from the Northwest, Northeast and Southwest, as well as I their immediate Southeast location, ‘Down by the Navy Yard.’”

Sadly, the store, like so many others, could not survive the Great Depression. In the early 1930s, the store moved to 743 8th Street. In spite of this, bankruptcy followed in 1932. The old store was used once more, however: When the bonus army camped in Washington D.C. in May, 1932, some of their number were housed in the now-empty department store.

One of the buildings was later turned into Stanley’s Five and Ten. On December 21, 1945, fire broke out in the store. By the time the city’s fire departments had put it out, over $100,000 damage had been done. The only casualty? A stockboy by the name of Francis Reese, who was overcome by smoke. He had, coincidentally, also been overcome by another, smaller, fire in the same building a few days earlier. It will come as no surprise that it was Reese who was arrested by the police a few days later and charged with arson.

Today, nothing remains of the old buildings: The SE Freeway covers the entire block between I Street and Virginia Avenue.