In writing my latest Hill Rag article, I came across a lot of information about various buildings on Capitol Hill that did not make the cut. Over the next couple of weeks, I will expand on some of what I wrote. Get a Hill Rag today to find out about the Navy Yard schools. Today, we explore the Anacostia fire house.

Fire has always been a problem in DC, and fire fighters have been part of the city since the earliest times. The first three fire houses opened in 1804, one near the Capitol, one at 26th and Pennsylvania NW, and one near the Navy Yard, which gives a sense of the importance of that neighborhood even that far back.

The Navy Yard house was called the Anacostia Fire Company and was located on Virginia Avenue between 6th and 7th Streets. (Don’t look for that site today, it’s in the middle of the SE freeway) For 35 years, they served the neighborhood – or so would be the assumption. Sadly, records of this time are sparse at best. The 1822 city directory, for instance, does not list the house.

In 1839, the Anacostia engine house built a new building a few blocks over at the corner of Virginia and 8th. The BaltimoreSun mentioned it the next year, saying that “[i]t is well built and very neat.” Furthermore, the Sun was impressed by their abilities and “[t]o see them work at a fire, you would realized the full force of that saying, ‘a long pull, a strong pull and a pull altogether.’” The company also received a new engine as well as a ‘suction.’ Both of these were made by John Agnew, of Philadelphia. The hose reel and hose were made by local craftsmen: Caleb Buckingham and George Lamb. At least they didn’t have to worry about their equipment failing to pass muster: Buckingham was also Inspector of Fire Apparatus for the District.

The Sun also gave more proof of the Engine House’s abilities in 1841, when they wrote of the great Georgetown Fire of 1840. In fighting this, the Anacostia company “reached there, with all their apparatus, in twenty-five minutes and worked as though they had a fleet of Frenchman to conquer, and a nap to take before meeting time.” 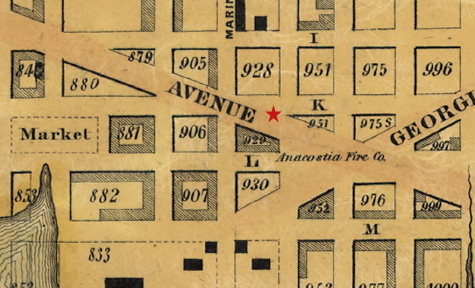 The location of the Anacostia Engine House. The star has been added to this 1851 map to show the exact location. (LOC)

A 1900 history of the Navy Yard neighborhood echoes the Sun in writing that the Anacostia engine house was “one of the very best in Washington” and that its members included “some of the sturdiest men of that section.” In spite of this, the Anacostia was one of the houses closed when the city went to a professional fire service in 1864.

In 1866 the building was taken over by the DC schools. For the next 20 years students received both primary and secondary education in the building. In its final year, it was named after ex-Mayor Walter Lenox, which name transferred to a new school building.

After this, the fire department returned. In 1905, Engine House No. 18 was installed in the old building. It would remain for some 50 years. About 10 years after this, the building was razed to make way for the southeast freeway. In case you want to see its site, it stood right where the new 11th Street off-ramp is being built.