Demonstrations have become a routine on Capitol Hill, to the point where we barely notice them any more. And today, demonstrations usually mean a bunch of people waving signs and chanting. In the old days, things were actually, well, demonstrated.

Although it was not until 1903 that the Wright brothers showed that powered flight was a possibility, the outbreak of the world war in 1914 proved that airplanes had made huge strides in the intervening years, and would have be a key element of this war – and any future ones, as well. It thus behooved the airplane manufacturers to show off what their latest wares could do.

Thus, in 1916, in spite of the United States still not having joined in to the fighting, a number of plane builders sent their airships to Washington to show them off. While today, this would mean them landing at a secure air base somewhere in the vicinity and shuttling congresspeople and staffers to see what they had to offer, in 1916, they went to where their audience was: Capitol Hill.

In this case, it was the Aero Club of America, which was keen on using flying boats to patrol the coasts of the United States. They thus took a plane apart in Buffalo and shipped it down to Washington.

Their target was the National Aerial Coast Patrol Commission, chaired by none other than Robert E. Peary, who had become famous some seven years earlier for arriving at the North Pole (or within a few miles, as later calculations had it) They thus rebuilt it in front of the Commission’s headquarters, just south of the Capitol

The plane displayed as a Curtiss model K flying boat. A larger version of the previous, successful, model F, Curtiss felt that they had a great item here. Two hundred members of Congress and untold rubberneckers all agreed; the display seemed to be a great success.

Unfortunately, not enough members felt the same way, and the sale never came through – and the United States’s borders remained undefended. Curtiss did have more luck in selling abroad, but their customers were the Russian government and between difficulties in getting the planes there and the country’s internal problems, the flying boats never came into their own. 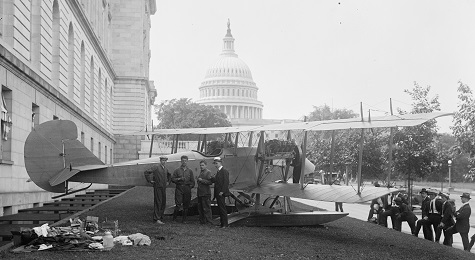 Curtiss plane in front of Capitol in 1917 (LOC)

In spite of this setback, the idea that showing planes to the appropriators was considered a winner, and the next year, Curtiss was back with more planes. This time, the planes were parked directly in front of the Capitol – and this time, their sales pitch worked. With the United States entering the war, there was a huge need for planes, and the Curtiss company supplied thousands of them to the war effort over the next two years.

2 responses to “Lost Capitol Hill: Planes at the Capitol”