I am currently in the last throes of the writing of my latest book, on the urban legends of Washington DC, so today, I will talk about a statue in the Rotunda of the Capitol, around which many different stories have swirled.

According to a writer on the website Conservatives4Palin.com, “Within the walls of the United States Capitol Building there is a statue, “The Portrait Monument,” which honors the women’s suffrage movement. But, what makes this statue really unique is the fact that it is not yet complete.

“Adelaide Johnson sculpted ‘The Portrait Monument’ out of eight tons of marble. Johnson kept in mind that even though America had come a long way from the women’s suffrage movement, many issues still remain regarding women’s rights. Because of these issues, she left a piece of the rock uncarved for a future women’s rights leader. My assumption is that when America elects its first ‘madam president’ this statue will be completed.

Along with the statues in the Capitol building that are part of the national statuary collection, there are also a number of statues that were given to or commissioned by Congress. The most famous of these is one known officially as The Portrait Monument to Lucretia Mott, Elizabeth Cady Standon and Susan B. Anthony. The statue, also sometimes referred to as The Woman’s Movement, consists of the busts of these three leaders of the woman’s suffrage movement and was sculpted by Adelaide Johnson. The monument was presented to Congress by the National Woman’s Party, and unveiled in the Rotunda in 1921.

Woman’s suffrage was a late arrival in the United States; Women were not given the right to vote in national elections until August 18, 1920, when Tennessee became the 36th state to ratify he 19th Amendment, almost 40 years after Susan B. Anthony and Elizabeth Cady Stanton had drafted it.

Adelaide Johnson, already well-regarded as a sculptor, was commissioned by the National Woman’s Party to create a monument to those who fought to give women the vote. She chose three of the most important suffragists, the two drafters of the 19th Amendment along with Lucretia Mott, who had been an early proponent of voting rights, as well as Stanton’s mentor, for her monument.

None of these three leaders had seen women’s suffrage become the law of the land, but Johnson, who had been active as a sculptor for over 40 years by this time, had done portrait busts of all three over the years. Beginning with a 16,000 pound block of Carrara marble, she sculpted three busts coming out of the rough stone. Behind the three is a bust-sized lump of unfinished marble, and it is this around which so many stories swirl. 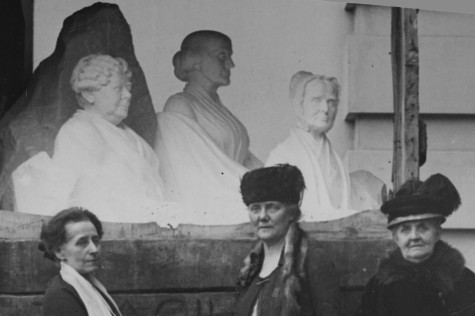 The statue at the unveiling. Adelaide Johnson is on the left, with Dora Lewis and Jane Addams (Photo courtesy The Library of Congress)

To Johnson, the unfinished appearance referred solely to the unfinished work for women’s rights. She saw herself as a “feminist, not merely a suffragist,” that simply having the vote was an important step along the road, but by no means the destination. A 1986 monograph on Johnson states that “the roughly cut mass of marble … may be interpreted as representing all the unidentified, unheralded persons who have, or will, work for woman’s rights – a kind of an unknown soldier of the woman’s movement.” No one has ever creditably shown that Johnson hoped that someone else would eventually ‘complete’ her monument – in particular, to add a bust of the first female president.

Next week, more on the statue and its peripatetic existence inside the Capitol – and later attempts to amend it.