The Price of Awesome 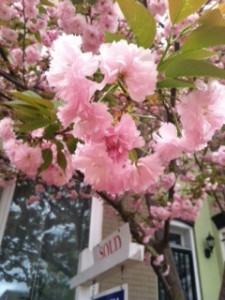 One last bloom from our Kanzan cherry tree before we go. Photo by Sharee Lawler.

Last week I told the sordid tale of our year-long search for a new house on the Hill that turned into a jaw-dropping education on how home prices have gone crazy.  So crazy that we got priced out and are moving to (gasp!) Northwest.

How did our little neighborhood become so pricey?  Here’s what I learned from the experience my husband and I had, as well as from my time as an Advisory Neighborhood Commissioner and a business owner.

Let’s start with the tangibles:

–  Inventory:  There just aren’t that many houses for sale.  You may see plenty of signs when you are out and about, but that can be misleading.  For example, during the brief time or house was on the market, there were several other houses for sale but only one in the same price category with similar features.  If you look at the overall inventory, it is often spread across several price ranges, and the general lack of inventory means few options in any single category.  And viola: our house goes on the market on a Thursday, our realtor takes bids the following Tuesday and we choose between the multiple offers.

(Rest assured, this is not just happening on the Hill.  The Washington Post wrote about the regional increase in home prices.  You can’t get away from it anywhere.  Frankly, I’d rather be dealing with this story than the opposite one that still plagues many cities.)

–  Local economic investment: A statistic frequently cited by Councilmember Wells is that Ward 6 has been the leading destination for economic development dollars (public and private) over all other wards the past several years.  A significant portion of that has gone to the Capitol Riverfront and NoMa, but that still leaves plenty of dollars going to places like H Street, Barracks Row, Pennsylvania Avenue and Eastern Market.  Just in the past 12 years, our home’s location in Northeast has transformed from a place taxi drivers wouldn’t go to a place they flock to pick up and drop off H Street hipsters.

There are more restaurants, retail (though we know you all want more), nicer – and more – public spaces.  There has been investment in schools, the rebuilding of Eastern Market and the addition of many family friendly spots like the North Hall, Playseum and Yards Park.  People come here to patronize these places and it makes them want to stay.

–  Developers:  I mentioned last week that once we’d run through the available inventory, we started looking at fixer uppers, but we couldn’t compete with the local developers.  There are a couple of big companies that snap up anything with promise, they pay cash and the pay more than the individual buyer because they will recoup their investment, plus a tidy profit, in two or three months.  I’ve seen one particular kitchen in so many houses that I can tell instantly which company owns it when I walk in the door.  Don’t get me wrong, they end up as beautiful houses with fantastic features.  We just couldn’t afford them anymore.

A few blocks from us, at 9th and C, NE, a larger house than ours with a similar footprint was gutted by one of these companies and sold for just under $1 million after one open house.  People flocked to the house on 10th just south of H Street and behind the soon-to-come Ben’s Chili Bowl that was on the market for just a couple of weeks for a shade under $1 million.  Four doors down from us, a developer bought the shell of the exact house we live in for $550,000 and have gutted and are in the process of expanding it (something we couldn’t do because of lot occupancy restrictions).  It should be finished in a few weeks and will probably also go on the market for around $1 million.

–  Lifestyle:  Capitol Hill is truly an ideal neighborhood.  The village-like feel and low density development throughout the area fosters a small town feeling.   It’s walkable, convenient to downtown and nestled between two of the largest economic development projects in the city in the Capitol Riverfront and NoMa, meaning that going to Metro Center will soon not be necessary in order to get to the office.  The historic charm has been well preserved, but with allowances for new developments that bring modern neighborhood amenities.

Residents are friendly and genuinely love and value the neighborhood.  When we widened our net and started looking at other neighborhoods, many were automatically ruled out as we asked the questions:  “But where is their Eastern Market/H Street?” (community gathering place that defines the neighborhood); “Who is their equivalent of CHAW/The Hill Center/the Atlas/Capitol Hill Community Foundation?” (arts and community programs); “Where is their Frager’s/Montmartre/Monkey’s Uncle/Argonaut?” (local businesses where you know the owners and that actively invest in the community).  Let me assure you, asking those questions rules out A LOT of neighborhoods.

– Overall quality:  Last week, the City Paper released their Best Of winners and not only did Capitol Hill take top honors among neighborhoods, but we also boast many winning businesses and community events.  We have beautifully preserved historic row houses and commercial buildings, top restaurants, several award-winning theaters and arts venues, and sought-after schools.  We don’t just have more, we have better. Add it all up and you get a great place to live.

So, is it worth the price?  The market says yes.  If it were possible to buy futures in Capitol Hill, I’d be first in line to add them to my portfolio.  But what do you think?  Do you see the same things?  I’ve received some messages since my last post about people who are experiencing the same thing, but they haven’t yet given up.  Would you?

3 responses to “The Price of Awesome”