A few days ago, a friend sent me a remarkable picture: A whiskey bottle that not only claimed to be distilled in DC, but had a Capitol Hill address on it. Anything having to do with booze on the Hill is like catnip to me, so I did some research. Short form: No, no distillery on the Hill. But lots of bad behavior, so I have that going for me.

The bottle, which was found in the wall of a house in the 1300 block of South Carolina Ave SE, says “Monogram Whiskey, a Blend. The James Clark Distilling Co, D.P. McCarthy, Mgr. Washington. D.C. John Danhakl 1368 C Street Southeast.”

A bit of research shows that the main distillery of the James Clark Distilling Company was just outside of Cumberland Maryland, and had been established in 1883, though James Clark – and his half-brother John Keating – did not actually begin selling it in 1895. Their main product was Braddock Maryland Pure Rye, but they also sold numerous other brands. Although they became best known for their mail-order sales, a trade that became ever more lucrative as more counties voted to become dry, their biggest markets remained those they could reach directly: Maryland and the District of Columbia.

As the DC market increased, they Clark and Keating decided to expand, and built a distillery on the 600 block of Pennsylvania Avenue NW, putting  one Daniel P. McCarthy in charge. It was a large building, extending south all the way to Constitution Avenue. This space is today taken by the Department of Justice building, which is a nice touch, given that the distillery had its own run-in with the law in 1908, when the local District Attorney seized liquor at this spot, claiming that it was not, as the label claimed, aged whiskey, but rather “neutral spirits … found to have been colored and flavored.”

McCarthy also sold liquor with private labels on it, and does not seem to have been particular about who he conducted business with, as his relationship with John Danhakl shows. 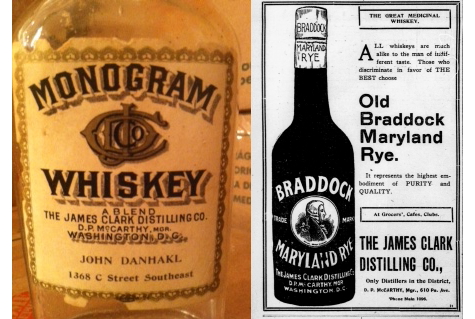 On the left, the bottle. On the right, a 1906 ad for Clark whiskey, indicating that it is from the only distillery in the District (LOC)

Danhakl, an immigrant from Germany, originally worked as a brewer, and lived, unsurprisingly, on Brewer’s Court (don’t look for it today. It’s an alley just south of H Street between 6th and 7th Streets NE. Most of that square has been taken over by a DC government building today.) His brothers Joseph and Anton were already in the liquor business, and in 1893, John joined them. At first, his establishment was at 1310 C St SE, but shortly thereafter, he moved to 1370 C SE. Danhakl’s name did not appear often in the newspaper, but when it did, it was invariably under unfortunate circumstances. Starting in 1899, when a laborer working for him died in the yard of the house, it got much worse in 1905, when there was first a riot at his saloon, and, a few months later, one patron killed another. The following year, it was Danhakl himself who was attacked.

In spite of these unpleasant occurrences, Danhakl and his wife expanded, building a much larger establishment next door at 1368. Sadly, Danhakl did not live long to savor the fruits of his labor, dying in 1912. His wife continued to try to keep up their life’s work, but was denied first a saloon license, then later a wholesale liquor license. She eventually converted the building into a grocery store, then sold out and moved first down the street, then later to her nieces in NW DC, dying in 1940.

The bottle must therefore be from around 1910, after the Danhakls had built 1368, and before John Danhakl died. As to the saloon, don’t look for it today. The only thing on the spot where it stood is a modern development built ten years ago.