Lost Capitol Hill: Hollywood on the Hill at "Spielberg Park"

One of the joys of living in DC is seeing your city –and your neighborhood– shown as a set on the big screen. Even more fun is finding how often they get it wrong. Mike Canning has been reviewing movies for the Hill Rag for the past 20 years, and he and the Friends of Southeast Library recently published Hollywood on the Potomac, a book about the films that take place in DC. Over the next couple of weeks, I will look at some of these movies concentrating on those that I am particularly partial to, and show how Capitol Hill has been used –and misused– in film.

Minority Report, a story by Philip K. Dick, was turned into a movie starring Tom Cruise by none other than Steven Spielberg. The premise is that, in the future, there will be people who are able to see into the future, and will thus be able to stop crimes before they happen.

An example of this takes place in the first exciting moments of the film. The pre-cogs, as the three who can see into the future are called, determine that a cuckolded husband is about to take revenge on his wife and her lover. Given the relatively spontaneous nature of the crime, they have only a few minutes to determine where it is taking place, using visions that the pre-cogs are having. Cruise, as Detective John Anderton, makes the connection that there is a merry-go-round, and thus a playground across the street from the row of houses, and an assistant determines that the houses were designed by Dwight Kingsley, an 18th Century architect “Who did two dozen buildings in DC.”

Having narrowed it down thus, Anderton figures out that the house is in Barnaby Woods, in the far NW corner of DC, and his units take off to stop the crime, arriving just in time to do so. To the student of DC, there is something wrong here. The house into which Anderton and his colleagues crash is a rowhouse, quite different from the small, detached houses that make up Barnaby Woods. Furthermore, the houses are clearly 1920s vintage, not the mid-1930s in which Barnaby Woods was built up. Instead, the area looks very much like…Capitol Hill. 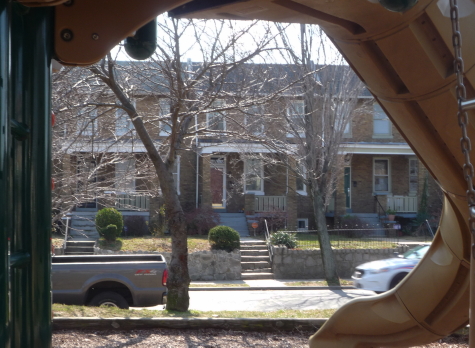 A couple of the houses on D Street, SE , seen from the playground equipment in Spielberg Park. That’s presumably not John Anderton speeding into the frame on the right. (RSP)

And, indeed, it is. It took Spielberg and company quite some time to find a row of almost identical houses that faced a park, but find it they did, on the 1700 block of C Street, SE. Designed by George T. Santmyers,, who designed dozens of houses on the Hill and built by T. A. Jameson in 1928, they are perfect example of 20s era rowhouses.

After a long negotiation to be allowed to use the properties, and another six weeks of preparation, the strip of houses was ready for filming. After the filming, Spielberg installed new playground equipment and threw a party for those living on the street. The park is today informally named Spielberg Park.

Just don’t go looking for the merry-go-round that features so prominently in the story. Presumably the threat of lawsuits stemming from its use precluded the inclusion thereof in the new equipment.