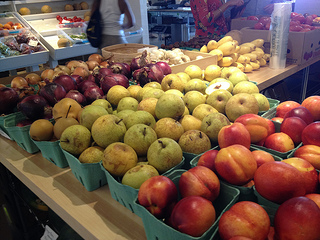 uploaded to flickr.com by tbridge

Food halls seem to be the new trend in the District.  Eastern Market started this trend like a thousand years ago, so perhaps it’s a trend that’s rebounding (what’s old is new again?).  Union Market in Northeast recently opened its doors, offering gourmet lamb sausage, empanadas, and New York style egg creams.  The Capitol Riverfront neighborhood may have it’s own food hall if some creative and vocal residents have their say.

Half Street Market is a c0ncept being pitched for a vacant 1924 GSA building at the corner of L and Half Streets.  The existing 30,000 square foot warehouse would be apportioned for multiple uses.  A multi-stall market hall would take the majority of the space, with the initial concept of movable stalls so the space could be cleared for public or private special events.  The proposal calls for market vendors to take on local residents or students as apprentices as a condition of the lease, educating and employing District residents.  An adjacent portion of the space that faces Half Street would be outfitted with large garage-style rolling doors that could be opened in good weather.  The openings would welcome visitors into the space, or in off hours facilitate deliveries.  Also included in the first floor concept are two small retail spaces and a potential pedestrian plaza that extends the Half Street plaza concept.

The design for the Half Street Market also proposes a second floor addition that would house a restaurant and rooftop garden.  The eatery would include a demonstration kitchen intended to teach culinary skills to local students as well as potentially host special cooking events.  The garden will be visible from the dining room and demonstration kitchen and would grow herbs and vegetables for consumption in the restaurant.

The residents who are advocating for the Market are asking for the city to acquire the vacant property from the GSA through conveyance at up to 100% discount from the market value.  The market’s economic and community value would be benefits that could be shared with the greater community.

If you are interested in the Half Street Market concept, residents are looking for feedback via an online survey.  Early renderings and floor plans can also be found on the website.