One of the topics that I did not touch upon in my book was prohibition and all the scandals surrounding it, whether the amount of booze being bootlegged into the Capitol, those congressmen who voted dry, but were themselves sopping wet, or even the many locations that you could procure alcohol on the Hill. The reason for this was simple: Garrett Peck beat me to the subject in his wonderful How Dry We Weren’t, in which he tells the whole inglorious story of Washington DC’s attempt to ban alcohol. One of the pictures within did intrigue me: A map of DC showing the location of alcohol-related busts. I had Garrett send it to me, as I was interested to see if there were any obvious landmarks shown. In the course of researching the matter further, I discovered that there is far more to the story than could fit into Garrett’s book, and thus, I offer a few vignettes from Capitol Hill’s struggle with the 18th Amendment.

In 1932, the Crusaders, a temperance group dedicated to the re-legalization of alcohol, and a reduction in the amount that people drank, published a map of Washington DC. In it, every location that the DC police had busted for alcohol was marked. The map looks, quite frankly, as if it has caught a bad case of measles, which is not that remarkable, given how widely the 18th Amendment, and the law that implemented it in DC, the Sheppard Act, were flouted. What is amazing, is that the dots represent only the rum raids of one year, 1931.

Capitol Hill is far from free of the dots, though it does manage to miss out of the ignominy of having a star. Stars indicated that the bust had occurred on Federal property. In fact, the area directly east of the Capitol is remarkably free of raid-induced measles, with only two busts occurring on Ptomaine Row (the site of the Library of Congress’s Madison building today) The real action occurred just south of Lincoln Park, between 11th Street and Kentucky Avenue, and the are north of the Navy Yard. While the former is surprising, in that there is no reason to believe that residents south of Lincoln Park were any less law-abiding than those, say, north of it, the Navy Yard speakeasies conform more comfortably with our preconceived notion of sailors and Marines. 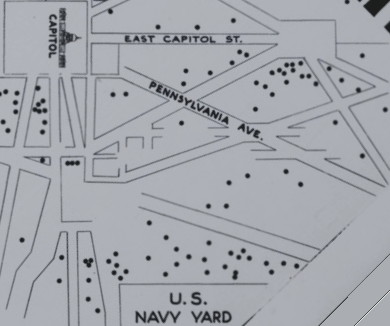 I then turned to the pages of the Washington Post, to see if they could shed any further light on these events. It turned out that the answer was pretty much a resounding No. In searching the archives, there is only one article that refers to a liquor bust on the Hill during 1931. The article, entitled “Five Held in Raids for Alleged Liquor,” describes the actions of one Private E. C. O’Meara, who on August 28, 1931, made four raids in southeast and southwest DC. The only raid in Southeast was at 745 Seventh St, and here Officer O’Meara arrested one Susie Miller, along with her stash of 150 bottles of beer and five gallons of liquor, or, what we around here refer to as ‘a pretty good Saturday night.’

This particular raid did not make it into the map, indicating that the Crusaders were not completists when collecting their data. Much more damning, however, is that none of the other 70 or so raids indicated on the map were mentioned in the pages of the Washington Post. Apparently, by then, the sight of agents charging into a house to arrest the occupants and confiscate their booze had become so commonplace that it was fit to print only during the dog days of summer.