The Heritage Foundation is expanding! Not content with its locations on Capitol Hill, close to the Congresspeople it lobbies, the conservative think tank is expanding to locations across the country, opening storefronts as far away as central Illinois.

Or so Representative Aaron Schock would have you believe.

Recently, a video appeared in Schock’s YouTube channel showing the Representative standing in front of a window clearly marked ‘Heritage Foundation.’ Schock then asks you, the viewer, to support small business Saturday on November 24 “here in central Illinois.’

As he speaks, he walks toward the street, the camera follows – and shows him clearly standing on Pennsylvania Avenue Southeast, near the corner of 3rd Street. The Capitol, which would have been a dead giveaway that this is not, in fact, Peoria, is conveniently cropped out of the picture. 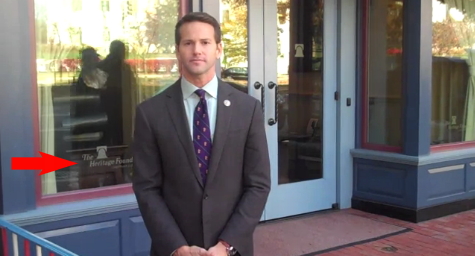 Still from Schock’s video. The giveaway Heritage Foundation sign has been highlighted.

Whether Schock is indeed trying to mislead the viewer, or if this is simply a mockup of what he fully intends to film on the streets of his home town, or if it was just added to his YouTube feed to troll local bloggers with too much time on their hands is uncertain.

Certain is only that this is not, in fact, the first time that a Republican has used Capitol Hill as a stand-in for a place in the heartland to promote small businesses. In fact, this sort of thing has been going on for over 50 years.

So, Representative Schock: What is this clip meant to be? Misleading, a preview, or a troll? We’d love to find out.

One response to “Capitol Hill now Standing in for Peoria”