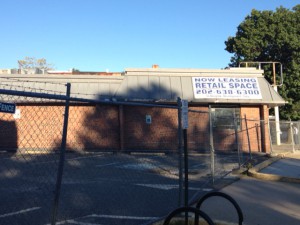 Some new information on the old KFC building at 1442 Pennsylvania Avenue, SE: Douglas Development plans to begin demolition of the building on Tuesday, September 25th and start construction on a new building in the next two to three months.

Instead of the four-story mixed-use retail and residential building reviewed by ANC 6B in 2011, Douglas plans to build a two-story retail and office building.

The updated plans envision a total of almost 11,000 sq. ft. of retail space with additional space on the building roof. It is unclear from the plans if the roof would be used for a roof deck or other purposes. Loading and trash pick-up would be off 15th Street, SE with a main entrance at the corner of 15th and Pennsylvania Avenue, SE.

From the drawings, it appears that the entrance for the second floor retail/office would be off Pennsylvania Avenue, SE. The architect, Antunovich Associates, is the firm that designed the “Market Commons” in Clarendon.

I’m working with my colleague Commissioner Jared Critchfield (6B06) and neighbors to schedule a meeting for residents to ask questions of Douglas Development. Since the previous commission approved plans for a two-story retail development 3-4 years ago, Douglas does not need additional review from ANC 6B nor approval from the Zoning Commission or the Board of Zoning Adjustment to begin construction.

Update 9/26/12:  The meeting is set. Douglas Development will discuss their new plans on Thursday, Oct. 4th, 6:30 pm at New York Pizza (1401 Pennsylvania Avenue, SE). Also, crews have been clearing and removing debris out of the interior of the KFC building.

This post originally ran on Commissioner Brian Flahaven’s blog, which covers the Hill East neighborhood and ANC 6B09.