Lost Capitol Hill: The Rebirth and Demise of the Coliseum

Last week, I wrote about the Coliseum, a bike-racing track on Capitol Hill, and the various famous bicyclists who raced there. Today, I’ll look at the end of bicycle racing there, and its further uses over the years.

The death of Harry Elkes in May, 1903 also signaled the end of the Coliseum as a bike track. Although numerous races were held over the next couple of months, all of them were disappointments to the promoters, and a steady line of dour headlines filled the Washington Post. At first, it appeared that this was due to failure of the riders: “Races Declared Off Again: For Some Reason Riders Were Absent and Coliseum Was Dark,” “Only Nat Butler At Hand: […] Fiasco at Coliseum.” Later, it was the crowds who failed to show up: “Bicycle Meet Not A Success,” “Motor Race Meet Abandoned” were the headlines. The last, which appeared above an article on September 9, 1903, was the last time there was an attempt made to hold a bicycle race at the Coliseum.

During 1904, the venue limped along on a variety of one-off deals, baseball and track and field events, as well as being rented out for “Picnics, Dances, Church Fairs & Etc.” as an ad entitled “Amusement for the People” had it. One newly formed baseball league, the Capital City League, even considered using the Coliseum for their contests, but ended up using the White Lot, located on the grounds of the Washington Monument, for their games.

The Capital City League, had been formed out of the best amateur clubs in the city, and its games were avidly followed by the newspapers of the day. Their plans for their second year of existence was thrown into turmoil in December 1904, when Congress allowed the American Railway Appliance Exhibition, which was to take place in the spring of 1905 as part of the International Railway Congress, to use the White Lot for its exhibits.

The baseball players had to scramble, and settled on the use of the Coliseum. Workers were dispatched to the grounds, and as quickly as possible, converted the bicycle track to a baseball stadium. In spite of their best efforts, the league was unable to start their games as early as they had hoped. 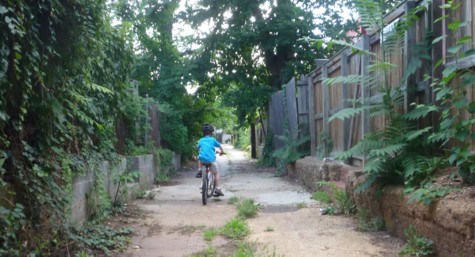 The alley between Ames and A Street today. (RSP)

Nonetheless, the Capital City League had an enormously successful year. The team sponsored by St. Stephen’s Institute again won the pennant, but, more importantly, all the teams were able to pay down their debts. All seemed well for the next season, and the Coliseum continued to be used for the rest of the year for various events.

Unfortunately, land around the stadium had become scarce – and valuable. Arthur Cowsill, a DC builder, realized that there was more money to be made from houses than from a stadium, and so he bought the land out from under the Capital City League. Within a year, improvements had begun and by the end of 1907, houses on the square (which had a new street, Ames, running through it) were on the market.

Today, nothing indicates the past history of this entirely residential square.