As the 11th Street bridge project slowly makes its way towards conclusion, which means that – for now – every trip across it means learning new ways through Anacostia and finding new corners to explore in that part of the city, it seems appropriate to learn a little about the history of this important crossing over the Anacostia River.

The original crossing at this point was the wooden “Navy Yard Bridge” (some sources call it the “Upper Navy Yard Bridge” but the first word generally was not used when discussing the bridge in the newspapers of the day) It opened in 1819, and had been built by a private company, the cleverly named Navy Yard Bridge Company, and thus was a toll bridge. It made money for its owners for the next 28 years, when it was sold to the government and thus no longer cost anything to cross.

This change was of enormous importance to the farmers who populated Anacostia at the time, and who could now bring in their produce more easily. Unfortunately, the bridge was not well built in the first place, and over the years, it suffered from the usual decay. An article in the National Republican of January 1, 1861, describes its state thus: “The piles and timbers are very much decayed, and may at any time give way.”

The writer continued on that it was probably more appropriate to replace the bridge than to repair it, and that the roads leading away from it – including the one to St. Elizabeth’s Hospital, were in such “bad condition that they can be scarcely travelled in the winter.” The importance of the bridge was underscored that year by numbers released by the drawkeepers, which showed that in the year preceeding June 30, 1860, 325,816 people, 83,268 vehicles, and 7,386 horses had crossed the Anacostia on its spans.

The outbreak of the Civil War a few years later precluded any further work in this direction, though the bridge took on added importance, as crossing the bridge meant that you were effectively in enemy territory. While still technically the District of Columbia, those who lived in Anacostia were allied much more closely with their secessionist neighbors in that region of Maryland.

During the Civil War, thus, there was always a guard on duty on the bridge, though the guard on duty on April 14, 1865 failed to stop a most important person. That night, at about 10:45 PM, John Wilkes Booth, who had shot President Lincoln less than half an hour earlier, after a brief discussion with one Sergeant Cross, crossed the bridge and continued on into Maryland. 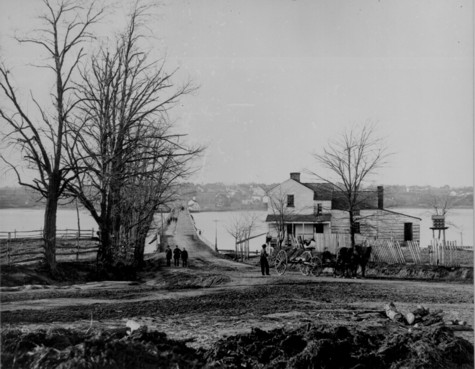 The Navy Yard Bridge, looking toward the center of Washington, in 1862. Photo by Mathew Brady (Smithsonian Institution)

The Navy Yard bridge only outlasted this tragedy by a few years. In 1874, a petition was made by citizens of DC to replace the bridge, which had long outlasted its use. It was, by then, often closed due to emergency repairs being done on it. On June 22, 1874, Congress passed a bill allowing the Secretary of War to spend 146 thousand dollars to put in a new “iron and masonry” bridge “at or near” the site of the Navy Yard Bridge. A year later, the new bridge opened, ending the first chapter of the saga of the 11th Street bridge.