Once again, my readers have come through with a question that had me research a completely new (to me) chapter in Hill history. In this case, it was a query about the use of square 1056, which was used in the early 20th century as a sports field, showing up in the Baist map of 1903 as a race track. Today, this square is entirely residential, and my reader was wondering what the story was there. Today’s column answers half that question.

At the turn of the 19th to the 20th century, strong growth on the Hill had been going on for almost 40 years. Nonetheless, there were still squares that were entirely empty, and thus ready for large-scale development. Usually, that meant building a whole lot of rowhouses, but occasionally, larger-scale projects were attempted, as well.

One of these was announced in a May 17, 1901, ad in the Washington Post. It invited the public to the opening of a new bicycle racing track, grandly named The Coliseum, located on A Street NE, between 14th and 15th Streets. The name was a bit of a misnomer, as it consisted of two short sets of stands at right angles at one corner of an oval course of 1000 ft. Nonetheless, it was considered one of the finest tracks in the country. 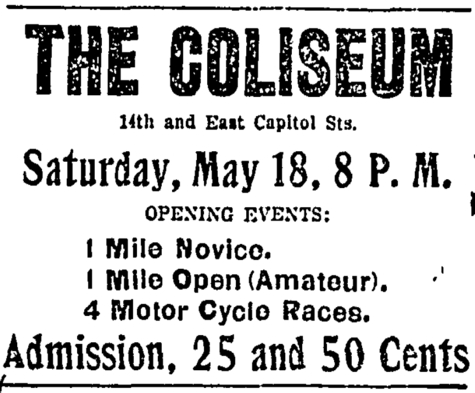 The ad from the Washington Post announcing the new stadium. The entrance fees were waived due to the incomplete status of the venue (WashingtonPost.com)

A large crowd showed up on May 18, though sadly the infrastructure proved to be unequal to the task: Most of the lights that were to make a nice clear track for the riders had yet to be hung, and the track was deemed too ‘slippery’ for the advertised races to be be held. Instead, a number of exhibitions were run, including a motor-paced ride. Using motorcycles to pace bicyclists was a relatively new sport, but one that had grown dramatically in popularity over the last few years. The speeds that the cyclists were able to achieve was remarkable, with professional cyclers able to raise their sustained speed from 26 mph to 42 by using a motorcycle that rode in front of them to cut the wind and help them slipstream behind.

The biker chosen to show off this new sport was Harry Elkes, a 23-year-old cyclist who had been making a name for himself for the past five years. Elkes had, just a few months earlier, broken all the records for motor-paced cycling by traveling 30 miles in 45 minutes, thus averaging almost 40 mph in that time. The crowd that evening was treated to his traveling around the 1/5 mile track 5 times in 1 minute and 39 seconds, indicating a speed of 36 mph – this at a time when the top speed for a production automobile was something like 20 mph.

Elkes was to do slightly better three days later, under the bright lights of the finished track, completing 20 miles in 33 minutes, but sadly he would lose this race to one J. L. Moran, whose motorcycles broke down less frequently than Elkes’s did.

Elkes would die almost exactly 2 years after his debut at the Coliseum when his tire burst during a race in Cambridge, MA. In the meantime, the Coliseum had become an important stop on the circuit of bicycle races that extended up and down the Eastern seaboard and as far inland as Ohio. Elkes had been due to race at there less than a week later.