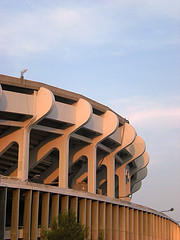 uploaded to flickr.com by sarahstierch

In the “any day now” category of DC government workings, Reservation 13 (the former site of DC General Hospital) was approved for a new master plan over ten years ago by the DC Council.  The plan, narrowed down from a number of submissions from developers, called for a mixed-use approach that promised new jobs, new retail, and an enlivened waterfront connecting to the RFK Stadium complex.  Some demolition on the site has already occurred, but the construction and promised neighborhood vitality appears to be still a distant hope.

Recently, Mayor Vincent Gray announced an interest in constructing a training complex for the Washington Redskins on Reservation 13.  It is unclear where on the site this facility would be located, how it would be integrated into the overall use of the site, and what impact it would have on planned residential densities or retail spaces.

Mayor Gray will attend a neighborhood meeting on Thursday, March 22 at 7:00 p.m. at the DC Armory to share his vision for the Reservation 13 site and answer questions from residents.  All are invited to attend.  Photo ID is required to enter the DC Armory.

In preparation for the meeting with the mayor, there will be an informal neighborhood meeting on Monday, March 19 at 7:00 p.m. at St. Coletta of Greater Washington (1901 Independence Avenue SE).  The master plan for the site will be reviewed at this meeting.