With the first draft of my book due tomorrow, I’m going to have to stick with reruns for now. I should be back with new material next week.

I have been meaning to write about this particular house for quite a while, but kept being stymied by the incredible numbers of Daniel and Charles Carrolls involved in the story. Taking advantage of a quiet weekend, I have teased out the different strands of this remarkable family, and bring you the story of one of the grandest houses in the District of Columbia in its earliest years.

Daniel Carroll was one of those who owned a fair piece of the Federal City in 1790, in fact, he owned all of the land on which the Capitol now sits.

Carroll of Duddington never made the money from this stroke of fortune that he had hoped. It all began when he built a new home for himself in 1791 – unfortunately, right where Pierre L’Enfant had planned for New Jersey Avenue SE was to run. Major L’Enfant had the house torn down in the middle of the night. Carroll, who was not a part of a prominent family for nothing, complained to President Washington, as well as to the Commissioners of DC. As one of these was Daniel Carroll of Rock Creek, his father’s second cousin, it is unsurprising that his complaint fell on fertile ground, and in short order, L’Enfant had been fired, and the commissioners had paid Daniel Carroll $4,000 for his pains.

Thus in 1793, Daniel Carroll was ready to begin again. This time, he built entirely within square 736. The four acres of ground were enclosed by a brick wall, and within were – along with the grand mansion – a number of smaller buildings, including servants quarters. Pictures from the time show a wide two-story house with a large porch out front. It was built in the simple Federal style of the time. 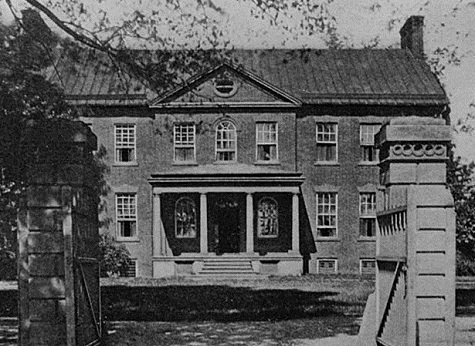 Duddington Manor, ca 1880. This is pretty much the only picture remaining of the house (Library of Congress)

Carroll had expected his land, most of which was east of the Capitol, to rapidly rise in value. After all, L’Enfant’s plan had promised as much. Unfortunately, the Frenchman was no longer in charge, and for various reasons (not the least of which being that Daniel Carroll demanded far too much for his lands) DC grew up to the west of the Capitol.

Daniel Carroll retreated into his house, and spent much of the later years of his life a recluse there. His unmarried daughters continued to live there after his death in 1849, but in 1886, they sold out the lands to a developer, the mansion was razed, and replaced with simple workers’ rowhouses. All that remains to remind us of this once-grand mansion is the short street Duddington Place, which runs from 1st to 2nd Streets SE between E and F.

2 responses to “Best of Lost: Duddington”