The Hill Center had its grand opening on November 19, showing to the community the results of the amazing amount of work that has been done there over the past years. Obviously, the open house was about the future, not the past, but to me, there’s always some history that can be found there.

So what caught my eye was not the booths manned by new tenants of the Hill Center, but a row of old bottles – bottles that show the arc of the Naval Hospital’s life.

If there was one group of people who were disappointed in the Old Naval Hospital renovations, it was archeologists. The assumption going in was that there would be much for them to do, lots of old artifacts that would deepen our understanding of this Hill icon. Particularly, a pit showed promise as a repository of old and cast-off items.

Instead, all that they found were a couple of old bottles. The pit was entirely empty, and the large amount of earth that was turned over in the process of installing the geothermal power source as well as landscaping the property did not bring to light much more.

But to the bottles: Two of them are labeled “Acid. Citric; U.S. Naval Laboratory; New York” and “Quinine Sulphate.” Citric Acid has long been used to help against gout and kidney stones, while Quinine Sulphate was an important medicine in the fight against malaria. Their presence in or near the hospital is clear.

The provenance of two other bottles is less obvious. These are clear glass half-pint bottles with no threads. Obviously older, they unfortunately have no indication of where they came from or what they once held. 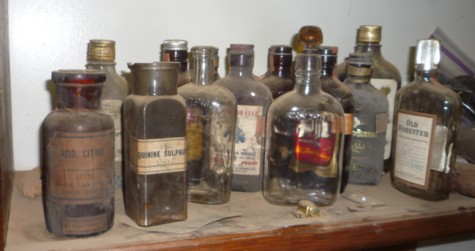 The source of the rest of the bottles are, sadly, only too obvious. Plastered with such labels as “Gallagher & Burtons Black Label” or “Old Forester” and possessing more or less modern screw tops, these are the remains of the many people who used the grounds of the hospital as their own personal al fresco drinking establishment.

In short, it is clear that the best hope for more information on what went on in the Naval Hospital is through the records that were kept there over the years, records which, fortunately, have been scanned and posted online by the Friends of the Old Naval Hospital.