This week’s column should be more accurately called a Found Capitol Hill column, for it is about something I found that belongs to a long-ago era, when Washington DC was home to the best baseball team in the country.

The year was 1924. The Senators had, after unsuccessful 24 seasons in DC, had finally won the AL Pennant and were due to face the New York Giants in the World Series. The Giants had won the Series twice in the last three years, making them a formidable opponent.

The Senators, however, had their own power: Chiefly Walter “Big Train” Johnson, who, in spite of getting towards the end of a stellar career, had still won the pitcher’s triple crown that year. Joining him on the roster were future Hall of Famers Goose Goslin, Bucky Harris, and Sam Rice.

They were by no means a shoe-in to win, what with the Giants sporting a total of nine Hall-of-Fame-bound players, and indeed the series stretched into seven games, including two games that Johnson had lost.

But I’ll let Sidney M. Hais, Capitol Hill resident who was interviewed for the Overbeck History Project take the story from there:

They went into the last game. Walter Johnson didn’t start the game, but towards the end of the game, they were tied in the last inning, so the game went to twelve innings. [T]hey won the game in the twelfth inning. It was two outs, and the score was 3-3. If Washington got a run, it would mean they were world champions in ’24. [T]hat last game, there was two outs and a Washington player by the name of Muddy Ruel was on second base. Earl McNeely, the center fielder, was at bat. Earl McNeely hit an easy ground ball to Freddie Lindstrom on third base, and it hit a pebble and bounced out in the outfield. Muddy Ruel, Washington Senators, came and scored the winning run and made the score 4-3. That was the game. That hit won the game and the World Series.

The Senators never reached this pinnacle again, in spite of making it to the World Series twice more in the next ten years. All that is left today are the faded memories of an increasingly elderly population, and such mementos as an official score card from this series that I recently came across. Its cover shows Calvin Coolidge getting ready to throw out a ceremonial pitch earlier that season, and within are pictures of all the players – as well as space for the owner to keep score for themselves. This particular copy shows no signs of any score-keeping, but is graced with several signatures of players, including Muddy Ruel, as well as the unlikely starting pitcher of game seven, “Curley” Ogden. 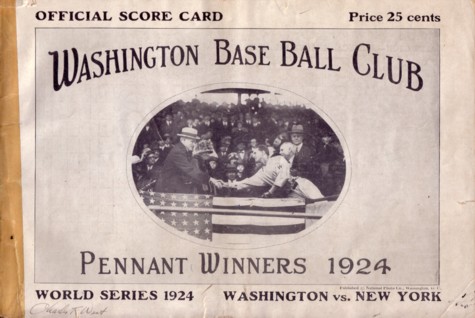 Score card from 1924 series. The name at the bottom left, Charles F. West, is presumably that of the first owner.

In short, a wonderful relic of a time when, for one year, Washington could boast of a world-champion baseball team. Who knows when this will happen again, but 2012 is not that far away, with opening day set for April 4.