Two weeks ago I wrote about the background of the Lincoln Emancipation statue and how it came to be. The Lincoln Statue is one of two important statues on the Hill, the other is the statue on the top of the Capitol, and this is my subject for today. It is also relevant to me in that it is the single most asked-about object in DC when I have a tour. The statue is today referred to as the Statue of Freedom, though it started with the much more cumbersome name Freedom Triumphant in War and Peace.

The genesis of the the statue came in 1855, when Thomas Walter, the architect of the capitol, needed something to finish off the new dome that was to be added to the Capitol. He suggested a statue of a woman holding a pole, on which was a cap. This was a piece of iconography from the 18th century representing liberty, and the meaning was well-known in the 19th Century.

Walter asked Thomas Crawford to turn his plan into reality, and Crawford responded with a statue he called “Freedom Triumphant in War and Peace.” It was the statue of a woman in a long robe, with a sword in one hand, and a laurel wreath and the shield of the United States in the other. On her head was a so-called Phrygian cap which had the connotation of liberty. In fact, it was a cap worn by freed slaves in ancient Rome. To Crawford, this seemed a good counterpoint to the more martial aspects of the statue.

Others did not agree. Chiefly amongst these was Jefferson Davis, who was Secretary of War at the time. Well-versed in the classics, Davis knew well the meaning of the cap, and particularly how it related to slavery. He argued to others that the liberty of the United States was “original & not the liberty of a freed slave,” but in reality, having any mention of freed slaves, no matter how veiled, was unacceptable. 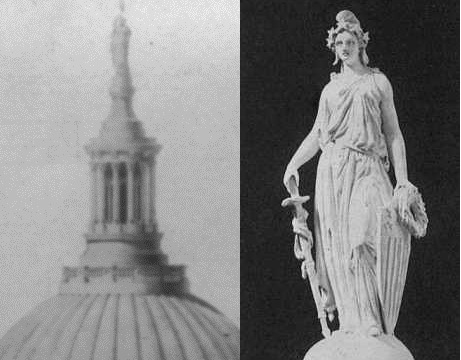 The original plans for the Freedom Statue. On the left, Thomas Walter's, on the right, Thomas Crawford's. (LOC)

Crawford returned to the drawing board and came up with the design for the hat we know today: a helmet encircled with stars and topped with an eagle’s head, feathers, and talons. Up close, it is clear what he meant.  Visitors who go to the Capitol visitor center can view his plaster rendition of the statue and, in fact, can go up to the mezzanine and view the head and helmet in great detail.

This plaster model was completed in Crawford’s studio in Italy in 1857, shortly before his death. The model was then shipped to the United States for casting in bronze. The trip took almost two years, but finally in 1860, it was installed in Clark Mill’s bronze foundry outside of DC for casting. The casting process, in spite of being delayed by the Civil war, was completed by late 1862, and on December 2, 1863, it was installed on top of the new Capitol dome.

Unfortunately, what with the size of the Capitol and the height of the dome, the statue is so far from most viewers that Crawford’s intentions are entirely hidden, and thus the enormous number of questions about this ‘indian’ that tour guides in DC are bombarded with.