Improvements Coming Under the Highway 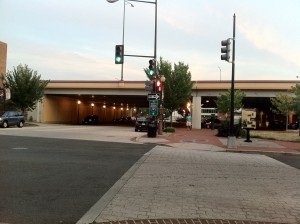 In discussions about the possible liquor license moratorium, a lot of folks talked about the lack of parking along Barracks Row, and how underutilized the parking lot under the highway at 8th and I Streets is.  It’s dark and feels unsafe for many; and for others, it’s just forgotten.  And it seems as though most visitors don’t know it’s there.  Barracks Row Main Street, CHAMPS, The Capitol Hill BID, the ANC, the folks at the Marine Barracks and other community leaders have worked with the city and DDOT to try to remedy those issues.

Next, DDOT will be installing snazzy new parking signs to direct visitors to the lot under the freeway.  The signs will appear along 8th Street at intersections both north and south of the 295 freeway alerting drivers that parking is ahead.  As soon as signs are installed, Barracks Row Main Street will distribute card-sized announcements about the parking lot at the businesses on Barracks Row as a way to help publicize it.

What about it being dark and a bit uninviting?  Along with replacing old light bulbs to improve lighting, we will be getting a new mural along the wall under the highway.  Several years ago, G. Byron Peck, who also created the distinctive Ellington mural on U Street, NW and many more Washington, DC murals, won a competition held by Barracks Row Main Street to create a mural for the 8th street tunnel. The permit process is now complete and the week after July 4th, crews from Peck Studios painted the first coat of what will be a mural under the freeway.  In the next few weeks more site prep-colors and the first images will be added.  The tunnel mural project has been in the permitting process for many years due to federal, city and historic reviews required. Expected completion date is spring 2012.

5 responses to “Improvements Coming Under the Highway”