With the opening of Yards Park and the imminent opening of Canal Park, it seems only appropriate to look at the history of the original canal on Capitol Hill. It’s hard to imagine, but there once was an active waterway cutting through Capitol Hill, by which it was possible to get all the way to Georgetown and points west.

When Peter L’Enfant laid out the new Capital of the United States, he was concerned about how to get goods through it. Streets in 1791 were hardly easy to navigate, and so it appeared that making as much of the city accessible by water was a priority for him. On his famous map, therefore, there are two canals extending north from the Anacostia, meeting at South Capitol Street, then heading northwest past the Capitol and then west along what is now Constitution Avenue and thus into the Tiber Creek, which flowed past the White House and into the Potomac river.

Originally, there was an attempt made to build this with money raised through a lottery, however the money never came through, and so the original work, which was begun in 1792, ceased in 1795. It was not until 1802 that Congress finally chartered the Washington Canal Company. This company would build the canal, and would be allowed to collect tariffs and wharfage for goods transported along it. Unfortunately, this venture was no more successful than the previous one, and after not completing the work within five years, the charter was revoked. A third attempt was made started in 1809 with a new incorporation, and groundbreaking occurred until 1810. This time, the new company was given seven years, and this time work proceeded rapidly — other than a brief hiatus during the War of 1812. Finally in 1815 the Washington Canal opened for business.

The canal almost immediately ran into troubles. First off, it was only about three feet deep, which radically reduced the number of boats that could travel on it. Furthermore, it was subject to the tides that raise and lower the Potomac, so the canal would frequently vary between dry and overflowing. Finally, the canal was susceptible to silting, which meant that it required constant maintenance to keep it operating. It was presumably because of these issues that the Washington Canal Company sold their interest back to the city, putting DC’s mayor in charge of these headaches. Every few years from then on out, Congress had to approve a new appropriation to clean out and maintain the canal.

Even before the Civil War, the rise of railroads made canals less relevant, and the Washington Canal experienced a dramatic loss of traffic. It became more and more of an open sewer than a thoroughfare, even though by now it connected to the C&O canal in Georgetown. A map from 1854 shows its course up 2nd Street SE from the Anacostia, then angling NW at about K Street before meeting up with the James Creek canal at South Capitol and G Streets. There were only three bridges in SE DC, one at New Jersey Avenue, one at L Street, and one at N Street. For most of its length, it is about 80 feet wide. 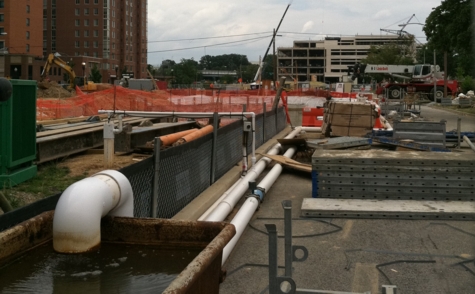 A very revealing document about the state of the canal and its “influences on the health of the population of the city” was written in 1868 on behest of the Regents of the Smithsonian Institution. After a brief overview of the various acts of Congress that involve the canal, the report gets down to brass tacks: “At the present time the Washington city canal is an extended cesspool[.]” The paragraphs that follow go into clinical detail about the amount of fecal matter being deposited into the canal, and how the water that flows through it is unable to rid the canal of this detritus. They are particularly concerned about the gases that arise from the canal, and how these can cause disease among those living along the water.

Their suggestion? To replace the canal with proper sewers, which will carry the city’s effluvia far down the Potomac and well away from the city.

More on this canal next week!