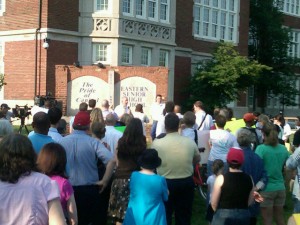 [Thus far, we have offered our readers perspectives on redistricting from ANC 6B Commissioner Brian Flahaven and Ward 6 Councilmember Tommy Wells.  Today we turn to Hill East resident and THIH contributor Tim Krepp for his perspective.]

As many of you already know, I, and many of the eastern fringe of Capitol Hill, may soon be split off from the rest of Ward 6. This has been an extremely frustrating process for myself, my family, and my neighbors and to say that we are near uniformly disappointed with the indifference and callousness of our elected leaders is an understatement. Shame on you, Phil Mendelson and Michael Brown. Jack Evans at least has the thin excuse that he represents the citizens of Ward 2, but you guys might want to at least consider feigning concern at your constituent’s issues.

Despite the rancor and shrill comments on all sides of this issue, the silver lining has been the overwhelming support from the rest of the Hill community. From our Councilmember’s steadfast attention, to the many neighbors who turned out yesterday, to my friends who have encouraged us, it’s been gratifying to see that Capitol Hill truly is a united community. It’s sad that obeying the forms but not the spirit of democracy are driving us apart politically, but I have faith that we will remain close as a neighborhood. Even if you can only hang out at my house for 1 hour and 59 minutes from now on!

There’s been a lot harsh things said about Ward 7, and that’s been unfortunate. The truth is, we have little to do with our neighbors across the river, and I’m disappointed that that distance, coupled with the outrage many of us have felt, has caused us to become even more distant. Not very One City of us, but it takes more than plastering a slogan on stationary for that admirable concept to become reality. You have to get out and lead to make it happen, and I’m not seeing that happen. I really wish some leader, perhaps a Mayor, a City Council Chair, an at-large Councilmember (bonus points if you’re on the redistricting committee), or even my (possibly) future Ward 7 Councilmember would stand up and give a better rationale than “well, someone’s got to get screwed, and I guess it’s you guys”. I’d also like a unicorn.

But on the subject of our fellow Washingtonians across the river, I’d like to elaborate why we have little kinship with each other. It’s not elitism, it’s access. Much has been said about the Anacostia River dividing us, but if that was the only obstacle, I’d be happy to reach across. No, the problem is that I can barely even get to the river. Between myself and it is the desolate wasteland of the RFK parking lot, the dilapidated dumping ground of the DC General campus, and the forbidding bulk of the DC Jail. All tied together by the trash-strewn empty promise of the Anacostia Riverfront trail. Just to get to the river I have to walk by generations of Washington’s failures. Hell, the river is downright inviting by the time I get there.

Even there, I’d have to go well out of my way to cross, using the very unfriendly East Capitol or Pennsylvania Avenue bridges. A depressing walk in the best of times, it borders on dangerous with my kids. Once across, I still wouldn’t see many signs of life. The Anacostia Riverfront has so much promise, but is itself barricaded from current Ward 7 by the monstrosity of 295 and the railroad tracks. To walk or bike to my nearest Ward 7 neighbor east of the river would be a journey of well over a mile. Small wonder that I’ve visited Ward 7 less than I’ve visited London in my time living on the Hill. I hear Ward 7 has quite a bit going for it. But it’s not accessible enough for me to give you a first hand account.

I hope, some day very soon, that we tear down those divisions between us. That Reservation 13 is a vibrant expansion of the Hill to the river. That my kids play with their classmates from Eliot-Hine and Eastern after school in parks and playgrounds along the Anacostia. That they can bike to each other’s houses via safe and welcoming bridges joining us together. That I don’t have to get in a car to drive miles away to community meeting affecting my Ward. But all of that will take sustained commitment, and we’re not there yet. We’re not even close.