Get Over Yourself, Mr. Mendelsohn 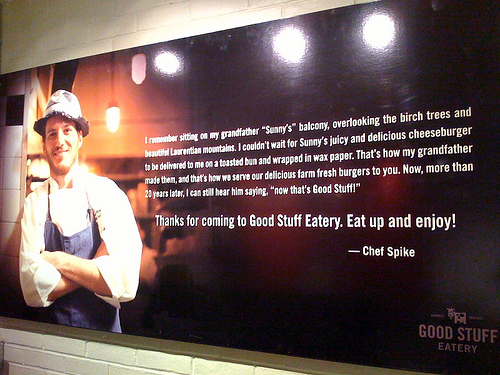 “It is nice to be in a second-tier city where you can be a big fish in a small pond.” –Spike Mendelsohn

Capitol Hill’s own Spike Mendelsohn is the subject of today’s People’s District. Incidentally, if you’re not reading Danny Harris’s amazing blog, you should. In the interview, Spike talks about how he ended up in DC and how he sees his place here.  As the quote above illustrates, he apparently thinks he’s a big fish here, in our little second-tier city.

Look, Spike: your burgers aren’t that good and your fries are but nubbins. They’re fine, but Michael Landrum’s Hellburger blows your “Good” stuff out of the water. The same goes for Frank Ruta’s burger at Palena. Ditto, BGR and even Five Guys and they’re (gasp!) CHAINS! The biggest issue I have with Good Stuff burgers is that they’re not cooked to order. I don’t enjoy well-done or even medium burgers, and if you’re going to consider yourself a big fish – more on that in a moment – you should be cooking your burgers to order like the actual big (burger) fish in town.

Now onto that “Big Fish” nonsense: I’m sorry, but you, sir, are not a Big Fish in the DC culinary scene. That would elevate you to the status of Jose Andrés, Johnny Monis, Cathal Armstrong, Nicholas Stefanelli or Vikram Sunderam, among many others.  Plastering pictures of yourself all over your restaurants and appearing on reality shows may make you a big personality, but that’s about it.  Frankly, I’ve never eaten at We, the Pizza for many, many reasons, not the least of which is the astoundingly egotistical décor. (Also, “we-izings’? Seriously? Give me a break.)  Maybe if you didn’t spout off things like, “When I used to visit my sister here, there was such a huge food void in this city. I remember coming to visit her and seeing that the food culture was so bad here, especially on this block where Good Stuff and We, The Pizza are now.  Everyone was concentrating on politics and it seemed like food was not that important,” which demonstrates your ignorance of the neighborhood around you (even back then) and instead quietly concentrated on making good food, you’d stand a better chance of elevating your stature in the DC culinary world.

Don’t get me wrong – there were certainly no culinary masterpieces happening on that block before Spike’s time (although, Roberto Donna’s Barolo, on the next block was wonderful), but I can’t say that his opening shop has changed that, and proclaiming himself as the Taste Savior of the 300 Block of Pennsylvania SE, is as laughable as the trite names of the sodas at We, the Pizza. I’m always grateful to have more choices in the neighborhood, but I’m equally as happy to pass up Mr. Mendelsohn’s offerings in favor of better food with less “personality.”

53 responses to “Get Over Yourself, Mr. Mendelsohn”