Who Takes the Cake? The Hill's Best Desserts 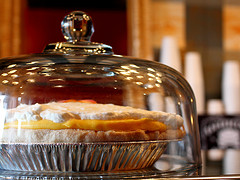 No offense dinner, but sometimes you are merely just a formality before dessert.

I love sugar. This is mostly attributed (although not scientifically) to the cake decorating class my mother took while pregnant with me, thereby ensuring that the desire for frosting would be forever sealed into my DNA. Here at The Hill is Home we had a lively exchange about our go-to place for a sugary treat on the Hill. So, where do you go when you can’t keep your sweet tooth at bay? Some of our favorites below.

There’s no denying the mini doughnuts at Matchbox are delicious. While it,s nearly impossible to down a few beers and pizza and still have room for dessert, these are worth a solo trip. Bite sized and covered in a cinnamon sugar coating, you won’t be sorry.

After I told a friend she could no longer pay me for babysitting (the baby is so cute it somehow seemed criminal) she showed up with a box of strawberry pop tarts from Ted’s Bulletin as payment. The tarts are second only to one of Ted’s other dessert items, the milkshake, which come in a variety of flavors, including “adult” options.

The milkshakes at Good Stuff Eatery are also quite good, the toasted marshmallow seems to be a fan favorite.

The Belgian waffle at Le Pain Quotidien is on another level. It was recommended to me by several people so I went with high expectations, which were met. It doesn’t even need syrup and while served at breakfast, it just feels like more of a dessert item to me.

Park Café has a fabulous chocolate mousse (as fellow THIH’er Maria pointed out!) A good mousse is hard to find, and even the bad ones aren’t a common menu item so its definitely worth trying.

What the Hill is lacking is a good candy bar (thanks to Nichole for pinpointing what I’ve been missing all these years!) Any takers looking to open up a store? You’ve got some customers in waiting.

9 responses to “Who Takes the Cake? The Hill's Best Desserts”