Readers of this blog are probably well aware of my predilection for scandals of years past, and am always willing to dredge up something untoward that happened 100 years ago. Today’s story and its heroine are particularly interesting in that they not only occurred almost exactly a century ago, but the main character managed to be embroiled in not one, but two scandals over the years. Not bad for a young woman from Capitol Hill.

Stephen Joseph Kubel was, in the spring of 1911, happy. A grand house at 10th and East Capitol Streets, a wife with whom he had recently celebrated his silver anniversary, a daughter in her last year at Eastern High, a son currently at sea after rounding out his studies in Germany, numerous investment properties, and 20 years as chief engraver at the US geological survey gave him every reason to be content. It was therefore quite a shock when his daughter showed him a letter from a man stating that “I hope I will get to meet you some time.”

The letter further stated that it was her picture in the paper that had prompted his writing. From today’s perspective, the missive was hardly scandalous. Except this was 1911 DC and writing to young women to whom you had not been properly introduced to was simply Not Done, even if you were – as he also stated in his letter – “a bachelor without any family of my own.” And particularly not if you were a member of the House of Representatives: the author of the letter, Abraham Walter Lafferty, had been representing Oregon’s 2nd District for just over two months when he sent the incriminating letter.

Although Kubel was deeply angered by the affront displayed in the letter, he decided not to confront the writer while in the midst of his righteous indignation. Instead, he waited a few days before stopping by Lafferty’s office, intent on “properly punishing” him. Finding Lafferty to be much smaller than he himself, he contented himself with extracting a letter of apology – not to Florence, but to her father. 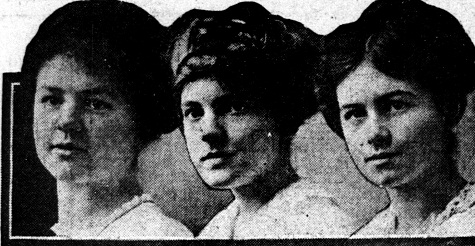 Florence L Kugel (center) and two colleagues from Eastern High (Mary Newcombe and May White) in the picture from the Washington Times of May 6, 1911 that started the whole affair. (Library of Congress)

In the letter, Lafferty claimed that he had, indeed, noted Miss Kubel’s beauty in a picture of her, but that the letter sent to her had been done so by his staff, who were concerned about his bachelor status and wished to do something about it.

Later, Lafferty would change his story, claiming that he had actually sent out a large number of letters to various people, and that Kubel’s letter was thus not to be taken all too seriously. This was after another letter had arrived in Lafferty’s office. Purporting to be from the elder Kubel, it “threatened violence” upon the representative, who had replied that he was available every day from noon to 1, and thus available for “any punishment Mr. Kubel cared to, and was able to inflict.” It was later determined that this letter had been sent from Portland, Oregon, and was simply an attempt by Lafferty’s political enemies to re-ignite a scandal that had thus far not managed to gain any public airing whatsoever.

Upon the disclosing of these new charges, various newspapers took up the challenge, including the Medford Mail Tribune, which titled its screed “Political Fakir, Street Masher and Cheap Liar,” in which it referred to the Representative as “Congressman A. W. (Romeo) Lafferty” and did not let up until they had insisted that the A stood for Ananias, the early Christian who had achieved infamy for being struck dead for lying.

Why Lafferty, who managed to be re-elected to the House, though from a different district, deserved this particular epithet was not further explained by the editor of the Mail Tribune. After his second term, he was ousted in the primary and returned to Oregon and his first love: suing the Federal government.

Miss Kubel was otherwise untouched by the scandal, and was thus free to marry – and thus become embroiled in a further scandal. Tune in next week to read all about it.

4 responses to “Lost Capitol Hill: Florence Kubel and her two scandals (Pt. I)”