We Don't Need No Education. It's Testing Week in DC 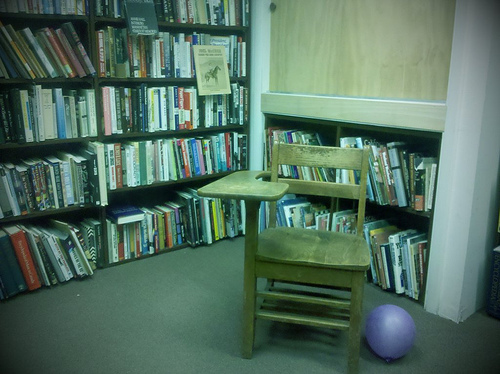 So, as I’m walking my kid and her friends to school the other morning, the conversation turns, as it’s wont to do with today’s six year-old set, to the impending testing regime, or the DC Comprehensive Assessment System, known popularly to them as DC-CAS. As the thread had segued from a previous discussion of Super Mario Brothers, I continued my usual policy of allowing children the space to develop conversational skill on their own. In fact, an uncharitable outside observer might even say I was ignoring them.

But eventually, my ears perked up, and I began to hear the awe and reverence these kids placed in DC-CAS. The test, which will be given District-wide next week to 3rd-8th graders, has no bearing on individual students, but directly affects teachers’ performance evaluations, funding for schools, and apparently, the tides. The consequences of failure seemed dire, with, from what I could glean from the kids, the likelihood of their school being bulldozed a real possibility. While my daughter seemed to be disturbed at this outcome, her young gentleman friend’s eyes lit up when this was suggested, and the conversation drifted towards that glorious dream, with discussions of who would get to drive the bulldozer in question.

But as I reflected upon this whimsical conversation, it seemed sad that our veil of crazy has been so easily pierced by the children. It’s no wonder, really. After all, at my daughter’s school, Brent Elementary, during the DC-CAS testing period, all students in 2nd grade and below are, in effect, banished from the school with several days of field trips.

Now, don’t get me wrong. I love a good field trip. With all that Capitol Hill and Washington, DC has to offer, we’d be neglecting these children if we didn’t take advantage of our cultural resources. Hell, I’ve got nothing against just taking the kids for a walk on a beautiful spring day. By all means, get out and blow the stink off ’em, as my grandfather used to put it.

But what message are we sending when we say, “Hey kids, education is important? It’s critical to your future. But not because it’s going to help you grow into a vibrant, intelligent, and independent member of society, but because we need you to do well on a test so the school can look good, the teachers won’t get fired, and the principal can get a bonus. That classroom time that was so important in October that you couldn’t take a family vacation? Forget about it, just don’t get in the way of the test.”

And really, mailing it in for a few days so the older kids can take the test is nothing, really. I consider myself lucky. After all, aside from this seasonal craziness, Brent is overall a great school, blessed with wonderful teachers and a strong parent community. At another Ward 6 school, which I’m going to keep anonymous to protect the teacher who related this to me, the teachers, “…were told, by the principal, to walk around the room looking for wrong test answers and then telling the kids something like, ‘You should look at that one again.’ Yeah, our test scores went up.” At least as a parent I don’t have to deal with teachers teaching cheating.

Can any of us really even feign surprise that with this single-minded focus on test scores cheating scandals are popping up around the city? What did we expect to happen? If you create a system where cheating is implicitly rewarded, you can’t really blame cheaters. When principals and teachers are given only one metric for success, obviously people are going to game the system, either relatively benignly like sending the non-test takers on repetitive field trips or by out and out cheating. It’s crap, I don’t condone it, and some of these people should be ashamed of themselves, but the real responsibility lies with us.  What are we doing as parents, as taxpayers, and as voters to demand better?

9 responses to “We Don't Need No Education. It's Testing Week in DC”