Although public schools have been part of the fabric of the District of Columbia since 1804, it was not until 60 years later that the first purpose-built school was erected in the city. The site selected was at the intersection of Pennsylvania and South Carolina Avenues, SE, a location that continued to contain schools until well into the 21st Century. The first building built was named the Wallach School, and it is its almost 90-year history that we will look at today.

Until the Civil War, schools in DC tended to be single rooms in other buildings, rooms that were used for all grades together. One of the larger structures used for instruction was in fact the old presidential stable; that school was usually referred to as Jefferson’s stable, owing to that president having been in charge when the first public schools were organized.

It became ever more clear that a purpose-built structure was necessary to properly teach the youth of the city, and so in 1864 Mayor Richard Wallach jr decreed that eight schools were to be built throughout the city. He hired Adolph Cluss (who would later design Eastern Market) and Cluss’s partner Kammerheuber to design the buildings.

The first school begun was sited at the corner of Pennsylvania and South Carolina Avenues in the southeast quadrant of the city. It was a great success from the start, and soon was filled with eager students and sometimes over-eager teachers: In 1867, Mrs. E. Roys, teacher at the school, was hauled into court for having beaten one of her charges. After it was determined that such a beating was, in fact, not contrary to school policy – even if it had been delivered by a two-foot ferrule – Mrs. Roys was duly acquitted.

During the next years, two more schools were built behind the Wallach school: Eastern High (which later became Hine Junior High) and Towers School, an elementary school. A further addition fortunately was not made: in 1888 a fire house was to be built on the site of the Wallach School’s playground, but a more suitable site was found behind Eastern Market. 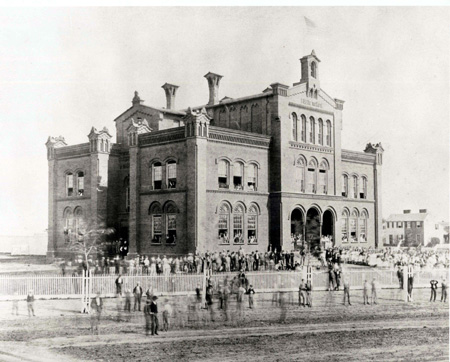 The Wallach School in the 19th Century (adolph-cluss.org)

By 1896, the school was in need of repairs. In the course of this, the school became a footnote in labor history, when the contractor hired to do the work, William W. Winfree, was convicted of breaking the eight-hour labor law that had been passed four years earlier. He was the first thus convicted, and the jury ruled against him even after Building Inspector Brady said that the overtime was necessary, as the building work must be completed by September 15, or there would be “100 school children […] roaming about the streets having a glorious good time and continued vacation, unless it was completed by that time.” (Post, August 20, 1896) Winfree later compounded his error by stealing the Wallach School bell.

Thereafter, the school rarely appeared in the newspaper, though in 1926, some equipment at the school was found to be 40 years old. Though some changes were made, by the late 1940s, the school was deemed to be outmoded, and without the likes of the CHRS and without the knowledge of repurposing that has been gained since the city managed to rescue the Old Post Office, the school was torn down in 1949 and replaced with what is now the empty hulk of the Hine Middle School.

Of the original schools, the Franklin School stands out as one of the survivors. Though no longer used as a school, it has been refashioned into a civic center and hosts conferences and meetings – and is well worth the visit to see what the first schools in the District of Columbia looked like.