Hine Site Slims Down, Much Space Use Still Uncertain 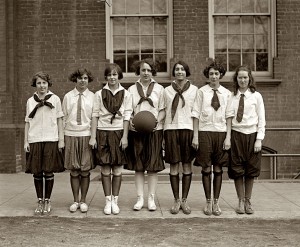 At a well-attended meeting dense with Ward 6 ANC members, bloggers, city council members past and present, community activists and Hine site neighbors, the architect of the proposed development for Stanton-Eastbanc revealed some alterations to the original plan amid fascinating old, archived photos of the area,  and a super-sized discussion on transportation issues.

So, as expected, the former proposed banner tenant –the 70,000 square foot  Shakespeare Theater Co. space — is not going to come, even if “we build it.” Indeed, the entire project will now be 85,000 square feet smaller, with the fifth floor penthouse pushed back from the crest of Pennsylvania Ave, SE and residential square footage increased by almost 100,000 square feet (now 244,074 square feet) since the team’s August 2009 proposal. Lead architect Amy “she practically built this block” Weinstein also noted that office space has been reduced to 150,156 square feet from 212,000 square feet.  There will be residential space for the traveling actors.

Tiger Woods Foundation has been off the table for a long time, but Ken Golding at Stanton Eastbanc didn’t really have anything substantive  to to offer as a substitute for the  lost youth services or youth space.  He said he was open to suggestions, and mentioned a hotel might have something to offer along the youth services line.

That’s right, a hotel  is still a possibility. Stanton-Eastbanc has been approached by several boutique hotels and is currently weighing options and in discussions.  Kimpton Hotels was a possible suitor under another proposal, but  Golding won’t divulge any names, yet. They plan to make a decision in 30-60-90 days, according to Golding, who added he loved “the dynamic” a hotel would bring to the  area. The hotel, should it come, would be built along 7th Street SE, but if that falls through, the area will be used for residential use, with retail along the ground floor and four floors of apartments above it.

The three residential areas of the complex will house apartments from 800 square foot studios to two-bed room with dens that could reach 1600 square feet.  They will provide the amenities needed to age in place, whether they are apartments or condos, the team said. The market at the time — the project won’t be completed until some time in 2015 — will determine whether the units will be sold or rented.  The developer has to make rent, too! Roughly 50% of the North Building residential space will be provided as mixed income units available to teachers in the area (for example) as well as seniors.

The plaza along the re-opened C Street SE (which looked lovely in mid-century vintage photos when it was lined with homes, trees, and was not a cut-though alley) has been enlarged but is not a stand-alone plaza anymore. Instead, it opens up into the corner along 7th Street. The lovely slide show of old and current photos also served to illustrate that there have been and still are buildings four, five and six stories high on the Hill — such as the lovely St. Cyprian on 8th Street SE, where the 60s-era brick town homes  are now — and that the Hine complex won’t be out-sized or too ginormous for words, or for the neighborhood.

Project consultant Nicole White, a principal from transportation and parking firm Symmetra Design, led the transportation discussion, sharing analysis of traffic monitoring over a period in November 2010.  White said she is  taking into account citizens’ concerns about pedestrian safety at 8th Street SE and C Street SE, and traffic flow around the area, and would reassesstraffic and parking at  the flea market, as urged, on a Saturday, rather than Symmetra’s analysis of a Sunday. Saturday   is busiest, argued the chair of the Eastern Market Advisory Committee, Donna Scheeder, contradicting White’s assessment. White acknowledged that though she had her firm are well-seasoned (St. Elizabeth’s Hospital), the traffic development part of the project is still a work in progress. Trucks will enter at 7th Street SE in a dock hidden from the street, and underground parking (270 spots, 162 for residential) will be accessed through C Street SE. The remainder of the parking spots would vacillate between office, retail and market use between weekdays and weekends.

A possible bone of contention for flea market vendors is the new requirement that trucks park underground and wares be brought up in an elevator and transported (by dolly, perhaps) to the vendors’ tents, a longer, cumbersome and more chaotic process if pottery, furniture and installations are involved, one would imagine.

The designs will be submitted to the Historic Preservation Review Board at the end of of the month, and work will plod along with transportation consultants and the public, but financial closing on the property by Stanton-Eastbanc is still at least a year away.  Demolition cannot occur until building permits are in hand with full ownership of the site and a general contractor has been selected. After that, construction is expected to take two years. So, there will be many more meetings, and we will try and update you on salient and interesting points here, or just see you at the meetings (which are well-attended but still lack many voices among the neighborhood’s constituency!

As Barbara Riehle of  neighborhood watchdog group EMMCA noted in a listserv email after the meeting, “the project has been scaled down a bit (85,000 less square footage) and many of the expected components are gone.  But the developer seems to have heard some of the concerns of affected neighbors and has taken steps to address them.”

8 responses to “Hine Site Slims Down, Much Space Use Still Uncertain”