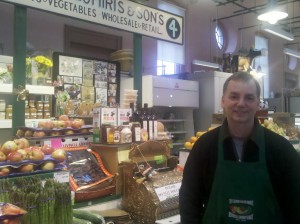 Death has taken a stalwart of the community and one of the longest-standing (literally) vendors at Eastern Market. Chris Calomiris, 86, passed away the last Saturday in January at Sibley Memorial Hospital after having trouble breathing Wednesday, and days after he last worked at his family-owned produce and dried goods business, Thomas Calomiris & Sons.

The cause was  liver cancer, his son said.  Soon after the diagnosis, he just slipped away with his family at his side, including his wife Maria, the family matriarch and the face of the business.  He had previously beat gastrointestinal cancer  five years ago. The Calomiris family has been at the market since 1962, and Chris was raised on First Street, NE, where the Hart Senate Office Building now stands.  He moved to Silver Spring to start his family, and remained there, sending his kids to Northwood High School there.

But he worked constantly, according to his son. The one day that Tom can ever recall the market being closed during operating hours, Sunday, was the day after he died. “He would probably be getting up to tell us to work that day, if he could,” his son joked. The family continued to sell on the sidewalk outside the historic building after the big fire in late April 2007, before being moved to the temporary tent. Chris lived to see the triumphant return to a restored Eastern Market.

Many memories are being recounted on the Eastern Market Facebook page, which Tom says he is enjoying reading. People are stopping by and giving condolences and walking away realizing a huge chunk of  their daily experience at the market is now missing. The bananas and other fruit he slipped into children’s hands — he always loved the children, his son said — are now part of the lore of the business which has touched people now far-flung and decades old.

Chrysti Hogan, who now lives in Memphis, grew up on 11th Street, SE, in the 1970s.  She told me via email that every Saturday, “my mother would go to Eastern Market. Most weeks, I would go with her as she browsed the vendor stands along the sidewalk, picked out fresh flowers to take home for the week, and went inside to buy fruit and vegetables from Mr. and Mrs. Calomiris. After she had chosen her items, had them weighed, and the prices added up on the side of a brown bag, Mr. Calomiris would pick out an extra piece of fruit (a banana or a peach or an apple) and hand it to me. I have fond memories of his generosity and sweet smile, and extend my deepest sympathies to his lovely wife.”

Stop by the stall and give your condolences. The sons, Tom and Leon, are working while their mother tends to the arrangements and  mourning, and they would like to hear from you. Maria and Chris are also parents to Zoy;  have five grandchildren; as well as having many loyal fans and friends, the world over.  That’s a life.

One response to “Goodbye, Chris Calomiris”