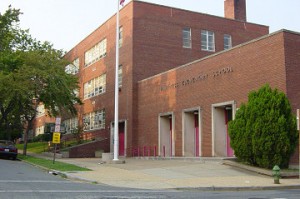 It turns out that when you only have one liquor license request to deal with on the ANC agenda, you can actually get through the meeting in under two hours! This was the first meeting for newly sworn-in commissioners, Ivan Frishberg, Brian Pate, Brian Flahaven and Jared Critchfield.  Neil Glick has replaced David Garrison as Chair, Ivan Frishberg was elected Vice-Chair, Jared Critchfield was elected Secretary, Carol Green was re-elected Treasurer, and Brian Flahaven was elected Parliamentarian.

Ivan Frishberg requested to add an item to the agenda to vote on a motion to send a letter in support of reopening Van Ness Elementary School to DCPS, which is expected to make a decision regarding the long term plans for the school this month.  The commission ultimately voted to support the motion, but David Garrison expressed his opposition to adding such a significant issue to the agenda at the last minute and without enough information. Garrison asked about the boundaries of the school, the capacity of neighboring schools — including charter schools — and the overall need for another elementary school in the neighborhood, also asking if the money would be better served renovating and upgrading existing schools. Kirsten Oldenburg also asked if ANC 6B needed to weigh in supporting the opening of a school that is not in 6B and whose in-bound students would not live in 6B (the school is in 6D).  Pate and Frishberg explained that with the current lottery system in DC, such boundaries do not really hold much weight and the school would very likely serve many students from 6B.

Naomi Mitchell, from Tommy Wells’s office spoke up to answer several of Garrisons’s questions and reaffirmed Wells’s commitment to work with DCPS to reopen the school, which is expected to serve the residents who will return to the neighborhood as part of the Capper/Carrollsburg project.  For more information about the project and its history, check out this section of JD Land.  And for more information about the Van Ness School and the recent community meetings about it, check out this section of JD Land.

In other news, Erik Holzerr, who owns Wisdom, Fruit Bat and Church and State, announced that he is forming a neighborhood watch group and is seeking the help of leaders within the neighborhood to join in the effort.  He will take up the issue at the upcoming PSA 107 meeting on Thursday, January 20 at Liberty Baptist Church 527 Kentucky Avenue, SE.  Brian Flahaven remarked that there are a number of neighborhood watch groups in his Single Member District and he would be happy to help bring the groups together.

The one liquor license on the agenda was for the Bavarian Beer Garden, slated to open at 8th and L Streets, SE.  The ABC Committee has continued to work with the owner on a voluntary agreement and a number of other compromises. The commission voted 7-3 to approve the request, provided the owner sign the voluntary agreement, however several stated that they were somewhat reluctantly voting to approve it.  Oldenburg explained that with the planned development on lower 8th Street, this does not fit the future vision of the street.  The three commissioners to vote in opposition were David Garrison, Neil Glick and Norm Metzger.

The remaining items were a number of zoning issues, which are a bit dry to summarize here.  If you are interested in such news, please come join me at next month’s meeting.

(You can also read JD Land’s recap on the school and beer garden issues here.)

One response to “ANC 6B Meeting Recap”