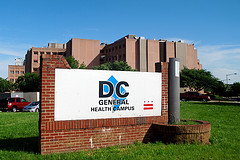 I don’t remember my Dante well enough, but I believe community meetings are featured in the 4th ring of Hell, correct?

I bring this up, because last night, Councilmember Wells hosted a meeting to discuss with neighbors ongoing developments at the former DC General site collectively known as Reservation 13. Two main issues are facing the community with this site: the stalled development of the site and its associated use as a dumping ground for a plethora of otherwise worthy social service programs. As it’s a complicated issue, I’m going to discuss the latter today, and will go into greater detail about the longer range plans next week.

While we wait for the redevelopment of the site, much of the frustration comes from what Tommy Wells referred to as a “dumping ground for social services.” Two main groups attracted the ire of most residents: the homeless and patients at a methadone clinic.

With the recession biting into DC, we’ve seen an explosion of the homeless population, and city agencies are scrambling to keep up. Hill East had been specifically promised in November of 2007 that DC General would stop being used to house homeless families. DC Department of Human Services head Clarence Carter attended the meeting last night, and apologized personally for not being able to fulfill the promise he had made on behalf of the city.

The basic problem is that there are just too many homeless people and families, and no where to put them. Ward 4 Councilmember Muriel Bowser has blocked a plan to use a facility on Spring Road in her ward and a proposal to add 100 more rooms at DC General was recently shot down by our Councilmember. With hypothermia season officially beginning November 1st (the City legally has to house people in cold weather), look for this issue to be a concern for the city at large.

While the homeless shelter proved contentious, quite a bit of concern was raised by the methadone clinic, formally the United Planning Organization Comprehensive Treatment Center. Unlike previously reported, the methadone clinic is not new, but instead will be an enlargement of an existing on-site clinic. Currently approximately 200 people are being treated there, and this will increase to around 500.

Tommy Wells asked the 40 or so people in attendance last night if anyone had any negative experiences with the existing clinic, and was roundly shouted down. Apparently, it was “unfair” to expect the community to provide feedback. People cited crime, litter, open air drug markers, and one person even cited a 2002 Washington Post article discussing the issue surrounding a DC methadone clinic (incidentally, the problems at that site were confirmed by a GAO study a few years later).  However, no direct experiences with the clinic or its patients were offered. I didn’t quite understand the objection to the question, so let me ask it myself. Have any residents noticed any problems surrounding the methadone clinic at DC General? Or, for that matter, other issues with crime, littering (which is a crime), and so on at the site, or more importantly, spill over from the site into our neighborhood? I’m really not trying to be snarky here; I would appreciate feedback as to the current impact of the site so that we have a baseline when if the expansion goes forward. Comments are encouraged, but feel free to contact me directly if you’d prefer.

Much concern was also raised about the lack of community notice about the Treatment Center. Tommy Wells and his staff only found out Monday about the issue, and, in fact, the meeting had been long planned to address the stalled development plans, not methadone clinic. And, in fact, there appears to be no community notification requirement for the clinic. For that matter, no one needs to notify Councilmember Wells or his office either.

While they weren’t there last night, the Department of Health’s Addiction Prevention and Recovery Administration has separately indicated they wish to be a good neighbor. Any issues with the clinic should be addressed to CTC acting director Brenda Kelly at (202) 682-6599.

And again, stay tuned next week for a discussion of the longer range plans regarding the site.