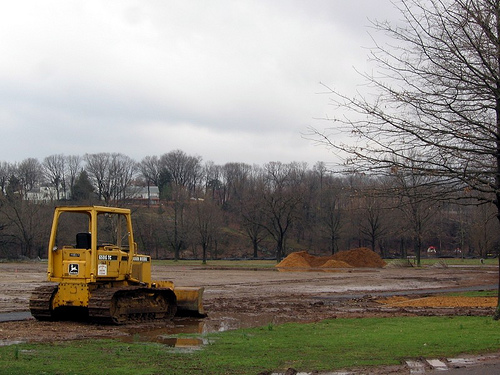 Barracks Row Main Street’s board  has endorsed an unsolicited proposal for the Marine Barracks Washington’s plan to build  the proposed Bachelor Enlisted Quarters (BEQ) on what is known as the 929-930 site, citing a perceived beneficial impact on Lower 8th Street.

This proposal allows use of part of 9th Street and a part of the coveted community garden at Virginia Avenue Park, according to Martin Smith, executive director of BRMS. The US Marine Corps has invited developers to make a number of proposals for various sites in and around the Lower 8th area.

“We are endorsing development of square 929 and 930,” Smith said.  “Because it would be sensitive to the historic nature of the buildings there and would allow for retail use of the first floor facing 8th Street.  There would be no demolition of historic structures (not that this would be permitted, anyway,) and no retail would have to relocate save for Dog-Ma, and Barracks Row would help the doggie day and playcare business find a new location,” according to Smith.

The Marine’s official ‘Request for Information” has not yet been drafted by the Marines and some say any decision is more than a year away, begging the question as to why BRMS adopted a resolution from an unsolicited party so early.

The Marine Barracks Washington public affairs office and those involved there did not get back to THIH with a comment on the situation. However, a source said that NO money since  in 2009  through 2011 has been “obligated” for Bachelor Enlisted Quarters construction at 8th & I according to Military Construction Programs C-1 document.  This means that the Marine Corps would be several years away, possibly more, from turning dirt on a project even after selecting a site.  The person said the extended  timeline could facilitate a compromise with the gardeners, as it would give the Marines time to identify and prepare the soil for an equivalent garden site. It is a long process: After the Marines select a site, negotiate a purchase, prepare plans, request money through the Military Construction budget process, they will have to conduct environmental  and Historic Preservation Act compliance before even beginning building.

Local blog JD Land has written about ruminations over the site in covering development in Near Southeast DC. The “929/930 … would close L between Eighth and Ninth and would take a big bite of the Virginia Avenue Park (requiring the move of the community garden closer to the freeway). A representative of Madison Marquette–owners of the “Blue Castle” right across the street–said that they are very much in favor of this option, saying that it would help to ‘animate’ lower Eighth Street. … There is of course a stretch of private homes along Potomac between Ninth and 10th where the homeowners might not be quite so interested in having military installations on three sides…,” JD Land wrote on her blog.

Jonathan Shartar of Madison Marquette [tagline-“transforming retail real estate”] was elected to the BRMS Board of Directors in July 2010, where his goal is to “further the development of 8th Street as a retail center for Capitol Hill and Washington, DC.” This was only a couple months before BRMS endorsed the plan that Madison Marquette was in favor of.

There has been a lot of concern among  nearby residents and others that the Virginia Avenue Park’s community garden, would be razed.

Smith quickly wrote in a statement distributed to THIH and local listservs that BRMS does not, as has been circulated, endorse the “bulldozing” of the Virginia Avenue Park.

“It is clear from theBRMS Board Resolution [below], we do not make reference to the Virginia Avenue Park in any way, but rather to the adjacent squares,” Smith wrote.  “Barracks Row Main Street is committed to preserving and enhancing open green space on Capitol Hill.”

Of course, it seems as though it would be difficult to preserve the park while construction takes place on the adjacent squares.

BRMS says it has learned that although the design option that has been proposed does use part of the park now used as community parkland, it replaces the green space at a nearly a 2:1 ratio, thus increasing the size of the green space but, of course, altering the footprint of the current parkland.

“As long as the net amount of green square footage that is accessible to the public stays the same or increases, it is an option that Barracks Row Main Street would consider,” Smith wrote.

The plan would replace a large surface parking lot on 8th street, and create new space for retail, with the potential for more square footage than the deep but narrow town homes on Barracks Row now offer, according to Smith. The plan would also maintain residential presence of the Marine Corp on 8th Street.

Save the Virginia Avenue Park Committee responded to news of the resolution by raising questions on the endorsement and its timing.

“The BRMS now states that the 929/930 proposal replaces, ‘at nearly a 2-to-1 ratio, the square footage lost as additional green space on other portions of the site.’ If such a plan was presented that achieves this goal, it was done so privately, without any consultation with those who have been working and petitioning to preserve Virginia Avenue Park,” said the advocacy group’s member Diana Elliott.

“The Marines, through the CIMP process, have stated all along that any use of the park would be swapped for equivalent green space elsewhere. But in meetings with them, they have never identified any sites for a potential swap of park land,” Elliott pointed out.

Elliott and Save the Park complained that the Marines’ planning team never explained how a green space goal would be created or annexed.

Save the Park is also concerned about the reality of security measures impinging upon the footprint of the Park, which is believed to be  under the jurisdiction of the city, and was in recent years a rough urban space. Now, even DC Congresswoman, Eleanor Holmes Norton, has come out in favor of preserving the parkland against marine Barracks development, those involved point out.

“Because of security requirements, the RFP that the Marines will eventually put forth to developers for building the barracks will require a considerable set back for security purposes.  Considering the set back required in the post 9/11 era, we do not believe a developer could only develop a portion of the park; they would likely need the whole park in order to be compliant with security issues,” Elliott said in an email.

Here is a copy of the Resolution:

IT IS HEREBY RESOLVED by the Board of Directors of Barracks Row Main Street (BRMS) that the BRMS Board supports the construction of the proposed Bachelor Enlisted Quarters on what is known as the 929-930 site, as the location of the Quarters on that site would have the greatest and most beneficial impact on Lower 8th Street.  The Board also strongly recommends that the Marines repurpose the current Quarters, also known as Building 20, either through demolition or renovation, in such a way as to maximize its utility to the Corps and the neighborhood as soon as possible after it ceases use as a Bachelor Enlisted Quarters.