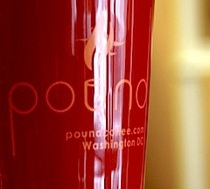 Pound Coffee has been quietly spicing up the lunch scene in NoMa with its “comfort food from around the world.” With Falafel Fridays, Curry Wednesdays and one dish prepared for lunch (veggie versions available) they’ve gotten quite the lunch following at their current location. Add to the fact that they’re the only coffee shop on the East Coast serving Wisconsin’s Kickapoo Coffee, and it’s a place any neighborhood would be lucky to have.

When owner Karl Johnson told me that he was opening a second shop — Pound the Hill — at 621 Pennsylvania Ave. SE, I was thrilled. When he told me they were going to have sidewalk seating clapped and squealed. When he told me it was going to feature patio seating in the back, I did a cartwheel. (Okay, that last bit is a lie — but I wanted to, which is all that matters.)

Pound comes to the 600 block of Pennsylvania SE at a good time, with other new neighbors Labyrinth and Ba Bay. They hope to open as soon as possible, but it’s too early to put a timeline on the project. To follow their progress, you should check their Facebook page and Twitter feed.

Welcome to the neighborhood, Pound!

By Nichole Remmert      No Comments