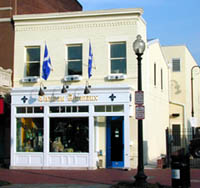 Chateau-Animaux, the Hill’s original chic pet store, –well, its third incarnation of it, after its original circa 1994 Eastern Market stall and then Doolittle’s on 7th Street — is under contract to sell to restaurant purveyors, hoping to open two establishments, one upstairs and the other downstairs, according to both Chateau’s owner and ANC6B’s Norm Metzger, who broke the news on his blog.

The deal is expected to close  Oct. 30, contingent upon financing, but Chateau’s business will remain in the building through the end of the year, as the owners scout out for a new, smaller venue for their doggie gear and other wares–minus the live fish/aquarium  business, though.

As with many things in life, and on 8th street, the course of the transition may be smoother on paper than in real life.

Moby Dick’s House of Kabob is the restaurant that is hoping to settle on the first floor. It is a chain of 15 restaurants with spots in Georgetown and Dupont Circle, as Metzger, who was briefed at an ANC meeting, noted. Meanwhile, owners of the shop formerly known as Oodles of Noodles on 19th Street, Nooshi, has applied for a CR restaurant license, and is planned for Chateau’s second floor.

The apparent applicants for a restaurant  license for Nooshi are Vanessa Lim & Partners, whose principal, Ms. Lim, did not respond to email queries. Her and her chef, Jessie Yan’s, eateries are profiled briefly here by Tom Sietsema.

According to the briefing Metzger et al., the building will host  two kitchens, a commissary kitchen (can you say food truck?) for Moby, and a regular kitchen for Nooshi.

The ANC and the ABC Committee will consider the case in November, but already opposition is building among some Barracks Row guardians.

“The ‘drums of war’ are already beating, and I believe there will be major opposition, on the principle that enough is enough,” warned one source.  Some people are concerned with liquor consumption, noise and trash generated by restaurant growth on Barracks Row, where retail stores have given way to empty storefronts or the high rent-paying restaurant businesses, according to sources and talks with retailers on the Row.

Chateau spells it out for us: “With taxes, rents, utility, insurance and employment costs, it has become increasingly difficult for small businesses to survive. Landlords are now looking for rents in the $35/sq foot range, triple net. When you add in the building insurance and property taxes, it is over $40/per square foot and there are not many small businesses that can generate sales enough to cover all that plus employee costs,”  said Dennis Bourgault, co-owner with his partner Michael Suddath.

ALL of the suitors for Chateau’s space were restaurant businesses, seeking to lease or buy, Chateau  told me  in  June. Of course, many at the same time embrace the new destination spots on 8th.

For  the pet store,  Bourgault  foresees a new store closer to 2,000 to 2,500 square feet, roughly the size of our first floor at Chateau.  Hopefully, he said, “we will reopen nearby as soon as possible after January 1.”

Chateau occupied the building in 2005, and expanded the live fish section, which proved to be unprofitable, and added a lot of extras, including grooming.

Good news for Hill mutts and their owners–Chateau will sponsor Howl-o-Ween, its annual doggie costume contest October 30 at 2 pm  in Lincoln Park.