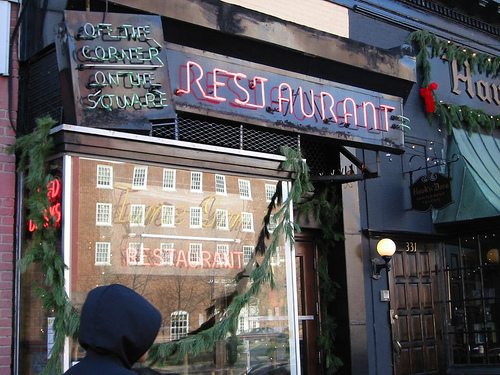 uploaded to Flickr.com by Bill on Capitol Hill

Last night our own local self-proclaimed dive was featured on the Food Network’s “Diners, Drive-ins, and Dives.”  The show, hosted by California caricature chef Guy Fieri, takes views all over the country in search of homey, filling comfort foods served by local institutions and throw-back eateries.  Last night’s episode kicked off with the Tune Inn, located for 47 years on Pennsylvania Avenue SE and currently run by third generation owners.  The Inn celebrated the appearance on the show with a viewing party last night.

Guy got behind the counter to learn how the Inn makes some of its signature dishes, including the “West Viriginia” sandwich and the apparently multi-purposed “bonton sauce.”  (My apologies if I’ve spelled that incorrectly.)  To emphasize the DC-ness of the place and proximity to the Capitol, Florida Senator George LeMieux gave a short testimonial about why he eats at the Tune Inn regularly.  I believe I saw Tommy Wells in a short clip on the show as well.

If you missed the episode, don’t fret.  A summary of the show and links to video clips can be found on the “Diners, Drive-ins, and Dives” website.  The episode will also be repeated on September 17, 18, and 19.

One wonders if we’ll see lines stretch down the block for Tune Inn’s roast beef sandwiches now that they have been on TV, similar to the throngs of folks that line up outside of Georgetown Cupcake after their fifteen minutes of fame…

3 responses to “TV Recap: Tune Inn on the Food Network”