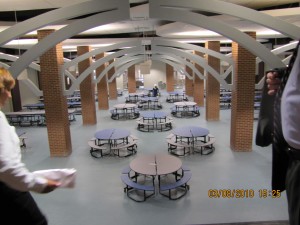 Eastern High School is back — and its beautiful.  And that’s only the part you see. 1700 East Capitol Street SE is now wired for sound, light and action, with state of the art duct systems, and electronics for its new sound systems, computer compositions, Promethean boards, theater lighting, electronic blinds operated with a remote, intercom and audio visual systems in each class, and, lest we forget this is an urban high school, surveillance cameras everywhere.

Ward 6 Councilman Tommy Wells arranged for a first post-renovation  tour for  community members Tuesday, under the masterful guidance Teresa Luther, of the D.C. Office of Public Education Facilities Modernization, (OPEFM) which has overseen the project from its large-scale spaces from a new roof, a cafeteria with a gourmet kitchen and a jaw-dropping honey yellow and blue sky-lit gymnasium  to details as small as restoring all mahogany auditorium chairs from 1910, and painting the woodwork on the sides in Eastern’s colors of yellow white and blue. (By the way, Wells, who has helped shepherd the Eastern renovation process in concert with DCPS, OPEFM, community members and parents, will now have his constituent services office hours here in a special, dedicated office.)

Music has been at the heart of Eastern High School historically, and its famed  marching band has a wonderful new orchestra and music room, as does the choir, there are new pianos and a baby grand in the sweeping auditorium space that can stage a Greek tragedy, or a contemporary dance company or a modern musical, sound booths for recording, rooms for composing, so students can create music for  the band, who can then record it, making the effort an all-Eastern collaborative project, as Luther explained it. The D.C. Youth Orchestra will be housed here as well, we heard on the tour.

Football and other sports are another emphasis at Eastern, with its expanse of playing field and a gymnasium stripped to its original floors and outfitted with electronic scoreboards for the Eastern High School Ramblers. It will knock the socks off the competition, and above it, a special “play room,” bigger than a pool hall and brighter than a NY loft, where the football team can assemble and replay touchdowns or tackles on a large screen TV. Flatscreen televisions and computers, Dells for most math and physics and other work, and Macs for music composition and synthesis, will all be installed  in classrooms throughout the building. 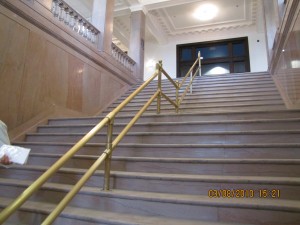 Restored marble entrance staircase--you can only walk up or down on it if you have graduated from Eastern!

Old walls have been removed, musty bricks taken down, big storefront windows placed overlooking grand public spaces to both let in light and provide visual access, and there are two spacious, almost Romaensque  atriums whose ceilings soar multiple floors,  where students can assemble, wander, bands can play, or small classes can meet under trees, or where students can take a break and gather to catch up — or text each other from the other end of the  palatial space. These areas used to be dark air vent -type of places atop scaly, old roofs. Now, big windows open onto them from every floor surrounding them.

Also, ignored illnesses and health problems not attended to may no longer result in epic absenteeism, a problem in D.C. high schools, as one public HS science teacher told me — the school will have a fully stocked pharmacy and medical services, including mental health professionals.

The science and chemistry classrooms are well-outfitted, and in many classrooms, layers of ugly plywood and vinyl have been torn up, layer by layer, Luther said, to expose the original pine floors. Luther also oversaw the restoration of the 1910 hand-made terra cotta floors in the entrance, and many other architectural details as well.

Eastern’s massive bronze inscribed bell made by Tiffany & Co., worth at least a million dollars, has been restored and stands at the entrance, the front stairs have been restored to original marble. You could import a wealthy nation’s embassy to these steps, they’re that grand — but only students that have graduated from Eastern are allowed to traverse these stairs, a restored Eastern tradition. (in the DCPS video of the mock up plans for a renovated Eastern, a computer-generated teacher and student talk casually on the marble stairs — this is not something we expect to see.  The 12th grade graduating class only will descend the stairs after graduation — and any alumni are also welcome to use it, but that’s all.)

Stairs they can and should take are the new staircase down to the cafeteria, formerly a dark, closed, gloomy space. Responding to the school’s renovation team, Luther redesigned the stairs so they would broaden and fan out onto the cafeteria floor for lunchtime, rather than recreating a narrower staircase for students to file down in lockstep.

The exterior windows have been redone in historical leaded glass. There are about as many windows as the student capacity at Eastern–1001 windows, 11oo students. However, only the legacy Eastern students now entering 12th grade will start this 2010/2011 school year. Next year, a full roster of 9th-12th graders will begin. Lucky them.

There is a full daycare for students that have had children; there are some students’ babies coming in within the incoming 12th grade class, Luther noted. It will be a highly protected area with indoor and outdoor play space. Little white cribs were already set up.

Luther unveiled a surprise, even for Wells – -a fully operational (medically) ambulance emblazoned with Eastern High School’s emblem, lifted and placed by crane, in the gigantic new health education suite, the better to learn how to rescue you, my dear. EMT training and other medical field education will take place here.

The administrative and counseling suites are extensive, and there is a police unit wing, and X-ray machines and metal detectors, as all DC high schools are outfitted with, but bars have been taken down, walls removed, and light let in, so the high school does not look like a jail, a goal for all DC high schools, Luther said.

Luther does not oversee programming, so IB program plans, classes, academic curriculum, are best addressed in another post.

The building is expected to be LEED Gold, or that is what Luther is shooting for, with all kinds of nifty acoustical panels and sound absorption systems. There are elevators throughout the building and the rooms, auditorium, etc., are all ADA compliant.

If you have an interest, there are a few more tours before the school year officially starts Aug. 23rd.  Contact Bonnie Cain, Wells’ education advisor  at bcain[at]dccouncil[dot]us.The fabulous Luther, an engineer by trade, may be there to lead you around. This is someone  everyone should want when it is their school’s turn to be renovated. That’s a hint from a Maury Elementary parent with kids matriculating to Eastern. Son–do NOT be the one who pulls the emergency water bath in the chemistry lab, do NOT post personal videos through the school visual intercom system, do NOT get hurt on the football field should you really take up football, do NOT climb the trees in the atrium, but walk to school safely, learn something on each floor, in each room you enter, have fun in the cybercafe, and walk down the marble stairs when you’re done. Little sis is watching.